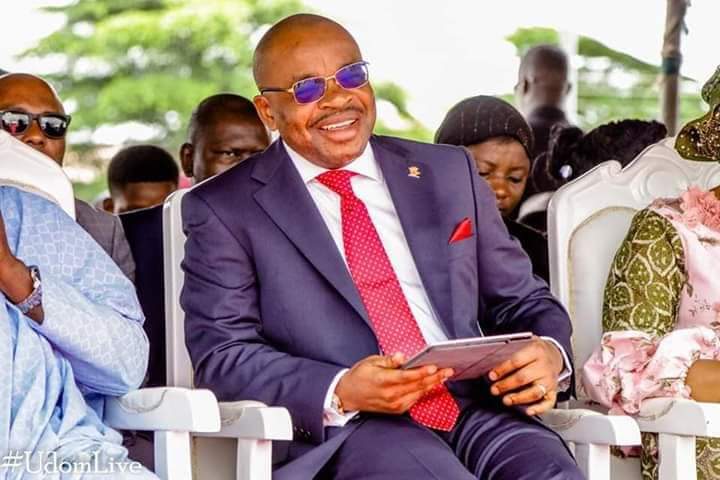 That Pseudo ‘King Of Kings’ Chieftaincy Title On Gov. Udom Emmanuel: Glaring signs of a decaying society are fast manifesting in Akwa Ibom State.
The signs are worrisome. Each day comes with symptoms which further confirm that the polity is unwell.

These are symptoms of a deeper malaise. The cancer has spread to every sector – even the traditional institution is not spared.

Just when we thought that the latest round of national disgrace brought upon us by kleptocrat youth leaders in the corridors of power has waned, elders arrived the scene to administer their dose of shame on us.

Operating under a group that is unknown to extant laws, they took their dangerous drama to a place that should be held sacred – the Chambers of the Akwa Ibom State Traditional Rulers Council.

Right in the presence of cameras, pressmen and staff of Ministry of Local Government and Chieftaincy Affairs, they conferred on the governor, the chieftaincy title of Obong Mme Mbong (King of Kings) of Akwa Ibom State.

Who are they? They call themselves Clans of Family Heads. They numbered a little over ten. Having done extensive checks within the traditional institution, yours truly reliably gathered that the group is one in a long list of splinter associations of family heads in the state.

For emphasis, family heads in Akwa Ibom are not members of the Traditional Rulers Council, they do not attend TRC meetings, they are not given Certificates of Recognition.
For family heads to be absorbed into the TRC, there has to be an extensive amendment of extant laws.

Men who are not legally recognized as chiefs therefore lack the locus standi to confer a kingship title on anyone, let alone a State Governor.

Common sense asserts that something cannot be placed on nothing. That the hallowed chambers of Akwa Ibom State Traditional Rulers Council was used for the event, speaks volume of the sham. And the sheer audacity to even proceed with the conferment without the blessings of bonafide chiefs spanning from village heads, up to clan heads and paramount rulers, makes it more indecent.

They struck a deal with the Commissioner for Local Government and Chieftaincy Affairs, Mr. Frank Archibong, who stood in for the governor at the event. An award plaque, staff and crown were among items presented to the governor via his commissioner.

It is audible to the deaf and visible to the blind that the conferment by the splinter group is an eye-service attempt, or a trick to push the governor into okaying an amendment of extant laws which would lead to them (family heads) being absorbed into the TRC.

Writing to the governor is one of the best ways they should have approached the matter.

That conferment which was appreciated with pregnant envelopes (transport money) reeks of shame to sane members of the public. Whenever and wherever money trumps merit, mediocrity and desecration of agelong values set in.

The borderline demarcating authentic custodians of our traditional institution from these imposter chiefs is apparently erased. I cannot hide my disgust for this frivolous practice perpetrated by men who should be role models to the younger generation.

Mr. Frank Archibong should have consulted widely within the traditional institution before stage-managing the farce. He is a man I hold in high esteem, but this particular act is a no, no!

Such trend should not follow him to the revered Ministry of Local Government and Chieftaincy Affairs. As someone who is relatively young (in his mid forties), his fathers in the TRC must guide him. That ministry is very delicate. The sighs emanating from the inglorious conferment are not good signals.

Few non-gazzetted men posing as Mbong (kings) storming the traditional rulers council chambers to confer a kingship title on the governor?
That is atrocious.

The traditional rulers council chambers should henceforth be given its due respect. It is a sacred place, not a public events hall, stadium, cinema, or circus.

That suspicious Obong Mme Mbong title conferred by men who, strictu sensu, are not bonafide kings should be shoved where the sun never shines.

Or, does it mean that my governor has accepted to be “dat kind” of Obong Mme Mbong? A king of a faction of non-gazzetted kings?
Indeed, these are weird times!