In a press briefing with newsmen, the President of the Association of Resident Doctors in the institution said about 32 of their members were sacked by the management. According to her, the sack was not in accordance with the laws regulating Residency Training in Nigeria.

She dispelled the statement of the hospital management who said they had not domesticated the Residency Training law in the hospital, hence were took their actions based on the hospital policy.

The President said, “The Medical Residency Training Act (MRTA) was passed by the national assembly in 2017. A year later, it was signed into law by the President of the Federal Republic of Nigeria, Mohammadu Buhari. 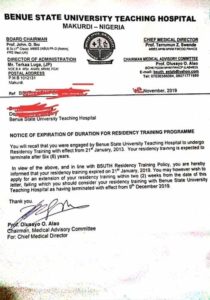 Funke Akindele: This Story of The Visit to Sen Dino Melaye Told in Comparison