DHQ: We’ve defeated insurgency in Nigeria; they no longer have authority 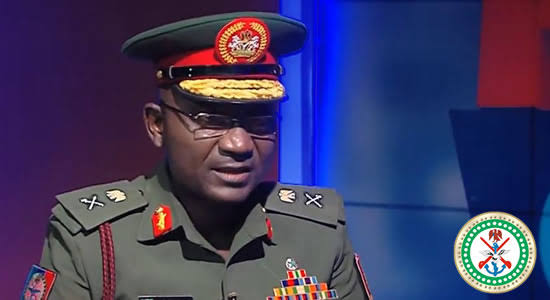 The defence headquarters (DHQ) says the Nigeria armed forces have defeated Boko Haram insurgents adding that they no longer have authority over any part of the country, especially in the northeast where they once had a stronghold.

Despite claims that the insurgents have been decimated, some parts of the north-eastern region still come under attack.

One of the most recent violent attacks by Boko Haram was at Zabarmari in Jere local government area of Borno state where more than 40 farmers were killed.

But during an interview with NAN on Monday, John Enenche, coordinator of defence media operations, said the federal government and the military since 2015 had checked the intensity of terrorist activities across the country — particularly in the north-east.

He said the initial delay in tackling the menace made it gain momentum — Boko Haram taking over territories and setting up administrative structures — before they were knocked off in 2016.

He said the open display of power and authority by Boko Haram no longer happens in the north-east, and that no single district or community could be said to be under the control of the insurgents.

“The issue of bombings that even spread to other places like Abuja, Kano, Niger and Kogi States, including their slipper cells no longer exist,” he said.

“What about suicide bombing, which is one of the signs of terrorism? It was rife and even at our checkpoints they come and detonate bombs as well as public gatherings; all these have been nipped properly.

“If you put all these together, I can tell you that terrorism has been checkmated.

“However, the signs are still there with isolated action here and there; common with terrorism.”

Enenche said history has shown that terrorism “is a very resilient type of enemy activity”, adding that the type of terrorism in Nigeria is not “a smart one” but rooted in the state of mind of a group of people.

While also on Channel Television’s Politics Today on Friday, Enenche explained that what the country now has are remnants and a weakened enemy (Boko Haram and ISWAP fighters).

“They are moving from bush to enclave and enclave to bush and no longer have any authority or sovereignty on any territory in the northeast and by extension, to Nigeria,” he said.

The comments come on the same day that the nation marked the Armed Forces Remembrance Day, in honour of the fallen heroes of the military.

While the nation continues to record some successes in its insurgency war, many have faulted the government’s claims of its success, even as many, including frontline officers have had to pay the supreme price.

Still, the government has severally reiterated that the insecurity fight under the current administration has been far more progressive than in previous governments.

General Enenche also restated this position on Friday, noting that “the Armed Forces of Nigeria made a lot of progress last year in the area of packaging itself to further the defense of this country.”

“As of 2015 before this administration came on board, at least 17 and 20 local governments were strongholds of the insurgents… by 2016 the whole of the northeast was recaptured and the government took back full authority,” he said.

He asked Nigerians to be bold in coming out to provide information on activities of the insurgents to aid security agencies in tracking their locations.

Boko Haram takes over military base in Borno

Boko Haram takes over military base in Borno