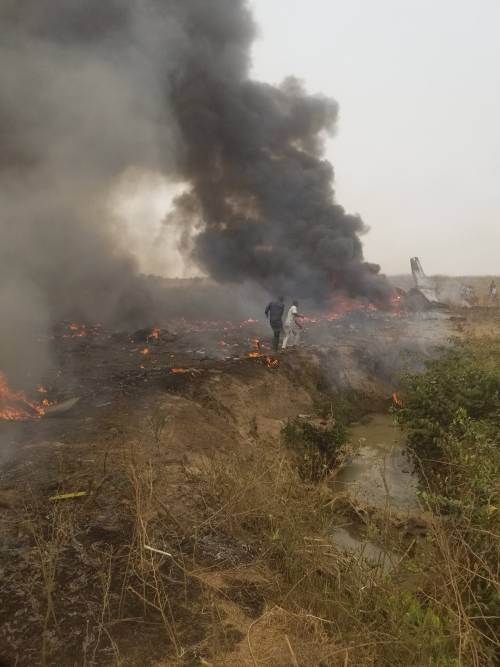 Six persons onboard a military aircraft were killed after the plane crash landed in Abuja on Sunday, 21st February, 2021.

The aircraft, a NAF201 B350, was said to be Minna, Niger State bound when it developed engine problem around 10:39am.

It was said to have crash landed at the final approach path of the Nnamdi Azikiwe International Airport runway 22 around 10:48am and immediately gutted fire.

Confirming the accident, the Nigerian Air Force on Sunday said seven personnel onboard a Beechcraft KingAir B350i aircraft died when the jet crashed at the Nnamdi Azikiwe International Airport, Abuja.

The aircraft en route to Minna in Niger State crashed close to the runway of the airport after reporting engine failure.

The Minister of Aviation, Hadi Sirika, in a tweet, described the accident as “fatal” and prayed for the “departed souls”.

List of five out of the seven person onboard the ill-fated NAF 201 B350 aircraft were – Flt. Lt. Gazama, Flt. Lt. Piyo, Flg. Offr. Okpara, FS Olawumi and ACM Johnson.

Reacting, General Muhammadu Buhari said he is, “Deeply saddened by the fatal crash of the Nigerian Air Force KingAir B350i aircraft today in Abuja, that claimed the lives of seven personnel. On behalf of the Federal Government, I extend heartfelt condolences to family members, friends and colleagues of those who died.

“I join the Nigerian Air Force, the military & all Nigerians in mourning the unfortunate loss of our dedicated & courageous personnel, who died in the line of duty. I pray that God will comfort the bereaved families & the nation, and grant the souls of the departed peaceful rest.” He added.