The  People’s Democratic Party, PDP, a major opposition party in Nigeria, has cautioned the President, Muhammadu Buhari, of pushing Nigerians to the wall ‘with its arrogant display of insensitivity and total disregard to the demands by the citizens to effect an immediate downward review in the pump price of fuel.

In a statement released on Monday, the party describes Buhari’s attempt to justify the ‘wicked increase’ in the pump price of fuel from N87 per liter under the PDP to N160 as provocative, confrontational and totally unacceptable to Nigerians. 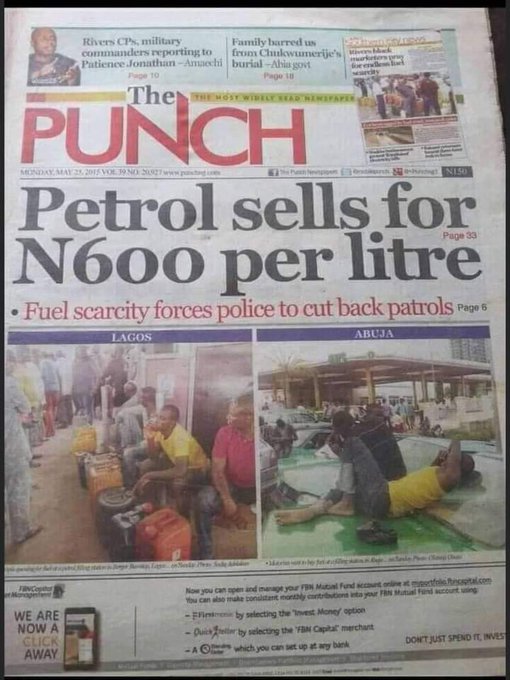 “Our party holds that the defence of such a humongous hike, which has worsened the hardship being suffered by Nigerians under the Muhammadu Buhari led administration, is in bad taste and should be rescinded immediately.” It stated.

The statement continues that, “It is indeed an unpardonable slap on the sensibilities of Nigerians that after running a heavily corrupt oil trade and subsidy regime, through which over N14 trillion naira had been allegedly frittered by its officials, the Muhammadu Buhari administration seeks to put the burden of high costs on innocent and already impoverished citizens.”

The PDP therefore “totally rejects this attempt to hinge the increase in fuel price on presumed removal of oil subsidy when it has failed to account for the proceeds of oil sales in the last five years, even in the face of confession by the Managing Director of the NNPC, Mele Kyari, in April this year, that the APC administration had been running an over-bloated and sleazy oil subsidy regime.”

They also spoke on the alleged mismanagement of the NNPC, in which no probe has been done and how the incumbent president had called fuel subsidy a ‘fraud’.

“Also the Buhari administration had failed to account for the confession by the NNPC that it was engaged in secret siphoning of oil money through a clamed subsidizing of fuel for certain West Africa countries.

“The PDP recalls that prior to his emergence as the President, General Muhammadu Buhari (as he was then known) had declared fuel subsidy a fraud. Five years after, the government, which he heads, is watching over a subsidy regime that is brimming with corruption.”

“Our party insists that Nigerians should not be made to bear the brunt of the huge corruption in the Buhari administration which has wrecked every aspect of our national economy.”

“It is incredulous and shameful for this administration to predicate the reckless increase in the cost of fuel on a faulty comparison with costs in other countries of the world, whereas the daily standard of living, the purchasing power and living wage of the average Nigerian in the last five years cannot be compared with what obtains in those countries.

“Such comparison is therefore not only absurd but also completely illogical.” It added

The PDP have also labeled the APC as anti-people over the shocking hike which is coming after COVID-19 pandemic.

“It is clear that the APC administration is completely anti-people as displayed in its refusal to heed to the cries of suffering Nigerians, who have rejected the fuel price increase, and there is no way history can be kind to any President who subjected Nigerians to the economic anguish and pains they have been suffering in the last five years.

“Again, we caution the Buhari Presidency and the APC not to continue to test the elasticity of the will of the people.” It concluded.