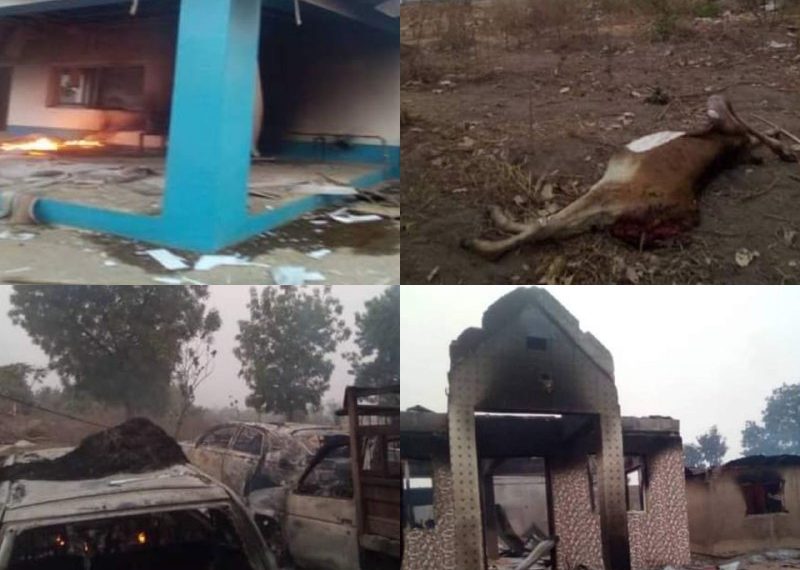 The settlement of the Seriki Fulani of Oyo State, Alhaji Saliu Abdulkadir, was allegedly set on fire by aggrieved youths on Friday night.

Abdulkadir told SaharaReporters in Ibadan that he, his wives and children were sent out of the settlement, adding that 11 vehicles and houses were burnt in the process.

He said that despite assurance by the police and the people of the state, his house was burnt in the presence of security agents.

He said, “As we speak, we are in the bush. Our cars, numbering about 11, have been burnt. Some of my children sustained injuries and we are looking for a way to get them to hospital. My children have left their houses for the bush. We need the government to help us. Police, Operation Burst and other security agencies were there when they set my house ablaze.”

Chairman of Miyetti Allah Cattle Breeders Association in the state, Alhaji Ibrahim Jiji, also confirmed the incident to our correspondent on the phone.

He said, “As we usually say, not all Fulani people are evil. Good people are among us. What can we call this now? The man is a gentleman and see how he was chased out of his house. We need the government to act now,” he said.

Sunday Adeyemo, an agitator for Oodua Republic, better known as Sunday Igboho, on Friday visited some Oyo communities to confirm compliance of Fulani people with the seven-day ultimatum he had given them last Thursday to leave Ibarapa and Igangan areas of Oyo State.

Fulani herdsmen have largely been blamed for the growing cases of killing and kidnapping in southwestern Nigerian.

Igboho addressed hundreds of youths at the Igangan Town Hall, while calling on the Fulani herdsmen to leave their land. He also insisted that Seriki must leave the town.

According to Igboho, many people in the town claims that Seriki was allegedly behind the insecurity in the area.

Speaking with SaharaReporters early Friday morning, he affirmed his decision to visit the communities despite the threats by the Governor of Oyo State, Seyi Makinde, to arrest him.

In a video shared online, Igboho was well received during his visit to the Igangan community as scores of people converged for his reception.

The people were seen jubilating; dancing and singing.

Addressing the people, Igboho said, “The Fulani have gone, we have sent them out of our land and they cannot come back again. Kidnappers cannot rule over us, they can’t take over our land from us. It belongs to us; they should stop threatening.

“Those who live with us peacefully; we are not fighting them but how will a visitor claim one’s house from him. If you live with us in peace, we have no problem with you but if you decide to kidnap and kill us, we don’t want you here. I assure Yoruba people, particularly those in Oyo State, that there is no danger.

“This one we have started here in Oyo State will not end here. We are going to other parts of the South-West. Tell Fulani herdsmen in Ekiti State, Ondo State and Osun States; in fact, in all South-West states that they should get ready for us because we are coming.”

In an interview with SaharaReporters, Igboho also alleged that the administration of President Muhammadu Buhari had not brought anything good to the people of the South-West except social vices.

Igboho, therefore, called on the president to take the Fulani out of Yorubaland.

“Buhari should come and evacuate his people from our land, we don’t want them again. They are just punishing the youths; they have turned us to nothing, why? The educated youth don’t have jobs, nothing, the gain now is to kill and kidnap us. We are still on the unemployment issue, we have accepted our fate, should we not be in peace and enjoy security again? It’s enough,” he said.

Earlier in the week, Igboho also alleged that when he visited Seriki Fulani of Oyo State, Alhaji Saliu Abdulkadir, at his home to urge him to do something about the killings and kidnappings being carried out by suspected Fulani herdsmen in the state, some Fulani people there threatened him with guns and also shot at him.

He alleged that one Fulani man also brought out an axe to threaten him.

Earlier, while speaking in Yoruba, Sunday Igboho said, “I cannot be discussing a country that cheats Yoruba people. We Yoruba should come together as one and send these people parking. No one will do it for us. Our senators are not doing anything.

They killed a woman who built her own filling station and others. Should that be so?”

Igboho said he was certain that Yoruba elders are not happy with the killings, however, he challenged them to do a video pledging their support for the Herder’s killings, if otherwise.

He said, “I’m sure the Kabiyesi is not happy with the killings, if they are, let them do a video and say so. They are not happy but they can’t wear the battle armour to the front, we are the ones that will do it and I know they will support us.”

He warned of impending doom if the herders do not leave Ibarapa by Friday (January 24, 2020).

He said, “Come and take your men away from Ibarapa, we don’t want such visitors. This will be more than #EndSARS. I’m not looking for popularity. I hate cheating. (Chief Obafemi) Awolowo said we would have to deliver ourselves. We are only going to Ibarapa on Friday to congratulate the people on the departure of the herders because they would have gone. They wouldn’t want to dare us.”

He commended the Ondo State Governor, Rotimi Akeredolu, on the ultimatum given to herders to vacate the forest reserves in the state.

He said, “Ondo State governor did well. He has human feelings. If only other governors will emulate him. That man understands that the same people he is governing over are those being killed. He is a good man.”

Igboho said the North was simply cheating Yoruba people because according to him, no Yoruba person would go to the North to build a palace and claim to be a ‘Seriki’ (Chief) of the area.

When asked if he feared the actions to be taken by the Nigerian government on the issue, he said he didn’t care about what would happen.

Oyo State Governor, Seyi Makinde, has ordered the Police to arrest Sunday Igboho and others causing tension in the state.

On Friday, Igboho went to Igangan to retstae his ultimatum to Fulanis to leave.

Igangan is a community in Ibarapa North Local Government Area.

The activist had accused the Fulani of perpetrating murders and kidnappings.

Makinde declared that his government would not allow anyone hiding under the guise of protecting Yoruba interests to cause ethnic tension and perpetrate crisis.

He maintained that the war Oyo and security agencies need to wage is not against any particular ethnic group but against criminal elements, irrespective of their tribes, religions, or creed.

The governor added that his administration would not allow anyone to threaten the peace of the state by acting unlawfully and saying things that are alien to the Nigerian constitution.

Supporters have warned Makinde against his arrest and many already calling him a traitor for Yoruba land.

Makinde told the new Commissioner of Police, Ngozi Onadeko, that his administration would continue to synergise with law enforcement organs fight criminals, hoodlums and bandits irrespective of their tribe or religion.

“For people stoking ethnic tension, they are criminals and once you get them, they should be arrested and treated like common criminals.

“I am sure that since you came in, you must have heard about some things happening at Ibarapa axis of the state. I will still say it here that we are not after Hausa-Fulani. We are after criminals”, he said.

Makinde had countered him in a broadcast, saying everyone has the right to live anywhere in Oyo State.

Igboho, on Friday, after the expiration of the ultimatum addressed thousands of supporters in Igangan and again ordered Fulani herdsmen to leave.

But Makinde, on Friday asked the new Commissioner of Police in Oyo, CP Ngozi Onadeko, to arrest and treat those igniting ethnic tension in the state as criminals.

Makinde said that attempt to fuel security tension under any guise that would threaten the corporate vision of Nigeria would not be tolerated by his administration while adding that his government was not against any ethic group, but was determined to flushing out criminal elements anywhere in the state.

But Igboho replied Makinde, daring him to arrest him, saying he would not believe his threat until he sent soldiers and police to arrest him.

“You can bring all Fulanis to Yorubaland, if you like, you unfortunate ones. It will not be well with you. You are threatening me in my fatherland with Fulanis. You will not prosper.

“Is it the Fulani’s that make the laws of the land? Have you forgotten when you were ‘bankrolling’ me when you wanted to become Governor and all I did for you all during the elections, and now you dare threaten me?

“Well, I don’t believe that you are serious with your threats yet, until you bring all the soldiers and policemen to arrest me in my house, before I know you are serious. You are all fools.”

In the video, he commended the Alaafin of Oyo, Oba Lamidi Adeyemi for his efforts at ensuring peace reigns in Yorubaland.

He said, ”Who says we are not going again? In fact, we are going right now. We thank Alaafin. I said earlier that we have the backing of ‘Iku Baba Yeye’.

“I swear by God who has my life in his hands that we will go to Ibarapa today. I’m talking from my house right now on Friday morning. We are preparing to go Ibarapa, let me finish my tea”.

“I’m promising my brothers and sisters in Ibarapa and Yorubaland that peace will be restored in the land. Whoever in Yorubaland backing the Fulani to perpetrate their crimes will perish with their generation”, he said.