Earlier today, Ibrahim Magu, the Acting Chairman of the Economic and Financial Crimes Commission (EFCC), was allegedly arrested by the Department of State Services (DSS).

According to Sahara Reporters, he was arrested over allegations that he owns four properties.

He is also alleged to have transferred funds abroad through a third party, reason why some Nigerians tagged him an “Offline Yahoo Boy.” 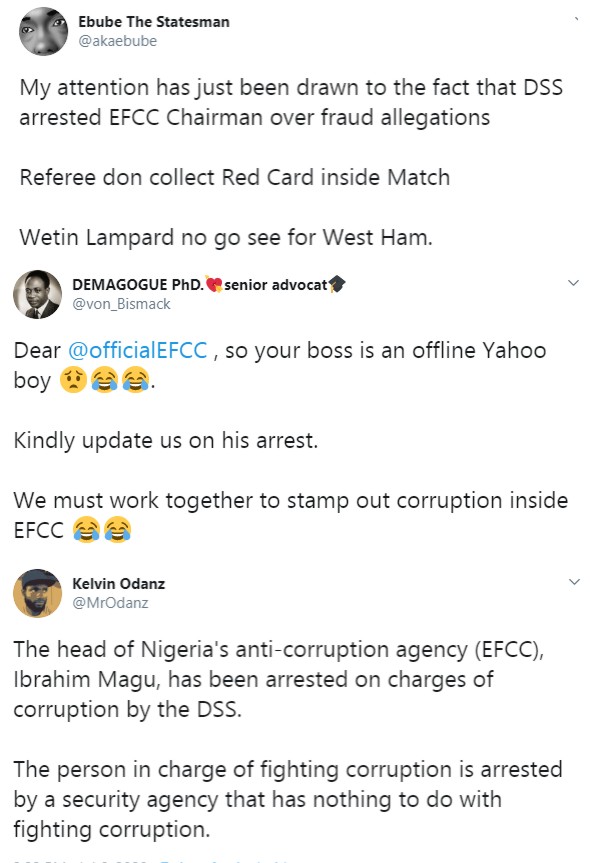 In 2016, DSS accused the EFCC boss of living in a N40m mansion paid for by one Umar Mohammed, a retired Air Commodore.

It noted that Magu is “currently occupying a residence rented for N40m at N20m per annum. This accommodation was not paid [for] from the commission’s finances, but by one Umar Mohammed, air commodore retired, a questionable businessman who has subsequently been arrested by the secret service”.

DSS stated that Magu enlisted “the Federal Capital Development Authority to award a contract to Africa Energy, a company owned by the same Mohammed, to furnish the residence at the cost of N43m”

In one of such trips, the report added that Magu flew to Maiduguri alongside Mohammed with a bank MD who was being investigated by the EFCC over complicity in funds allegedly stolen by the immediate past petroleum minister, Diezani Alison-Madueke.

“Furthermore, the EFCC boss has so far maintained a high-profile lifestyle. This is exemplified by his preference for first-class air travels. On 24 June 2016, he flew Emirate airlines first-class to Saudi Arabia to perform lesser hajj at the cost of N2.9m. This is in spite of Mr President’s directive to all public servants to fly economy class.

“Magu has fostered a beneficial relationship with Mohammed who by his confession approaches clients for possible exploitation, favours and associated returns,” the DSS report said.

In a soft reaction, the EFCC responded by saying Magu wasn’t arrested but invited, even though he was said to have been stopped in traffic while moving out of the Wuse II Annex of the EFCC in Abuja.

According to the EFCC Head of Media, Dele Oyewale, he only honoured an invitation by a Presidential Panel reviewing the activities of the agency.

He said the review was held at the Banquet Hall wing of the Presidential Villa, Abuja.

Oyewale explained that Magu “was served the invitation to the Panel, while on his way to the Force Headquarters, Abuja, for a meeting.”

He insisted that the EFCC boss “was neither arrested nor forced to honour the invitation”.

The spokesman disclosed that a member of EFCC legal team was also with Magu as he faced the panel.

To support this claim, the DSS also has denied reports that it arrested Magu.

Magu has had a running battle with the DSS and Attorney General of the Federation Abubakar Malami for quite some time.

Not long ago, Mr  Malami who is also the Nigeria Minister of Justice, urged President Muhammadu Buhari to sack Mr Ibrahim Magu, accusing him of “diversion of recovered loot to insubordination and misconduct.”

Journalists who went to cover the event at about 3.20 pm, were turned back by security personnel.

Even when the journalists who cover the State House decided to go to the press center at the Old Banquet Hall, they were politely told to excuse the place for a while.

“They said you people should excuse the use of this place for today,” a security official detailed to the venue, politely told reporters.

Magu was said to have been arrested by the DSS in Abuja on Monday, following allegations that he owns four properties and was allegedly transferring funds abroad through a third party.