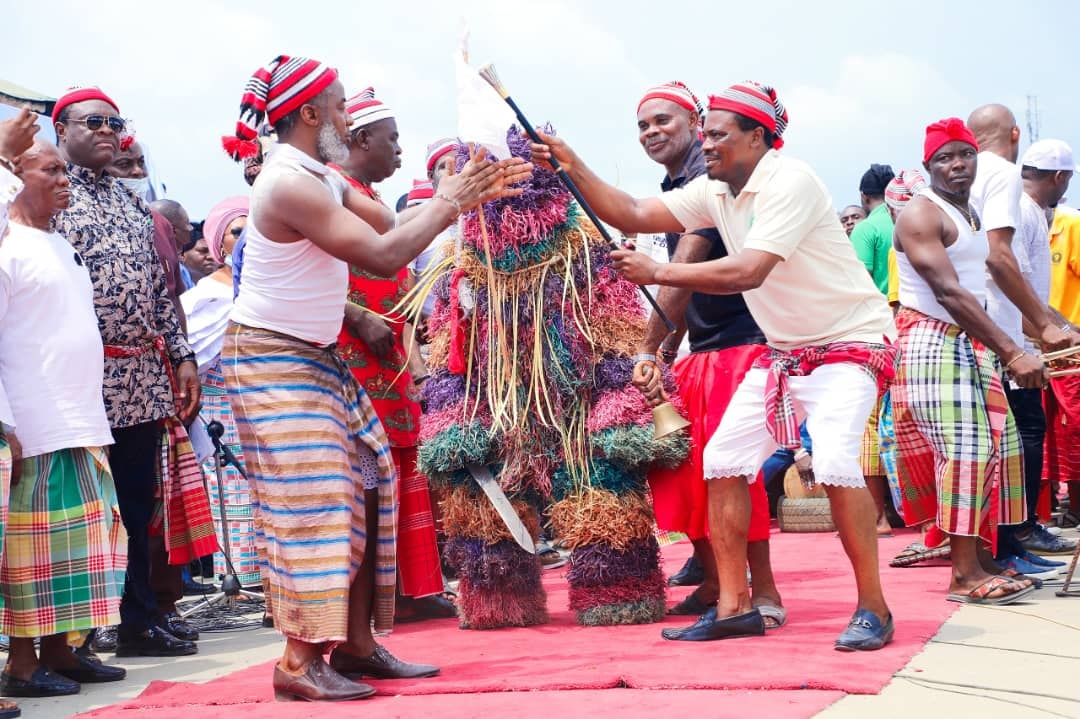 Idolatry is defined as extreme admiration or reverence for something or someone to the point of insanity. People involved in idolatry often spin lies to cover the obvious imperfections of their subject. This is the fundamentalism which we witness today among supporters of #PO that they are ready to believe any lie so long as it edifies him. Strange as this is it has not diminished my admiration for politicians. I like the courage of people who venture into partisan politics and seek elective offices. I say so because I witness unnecessary intrusions into their private lives. They are a heavy price to pay by all standards and that explains why I admire politicians a lot contrary to the pervading grains that loathe and treat them condescendingly. No politician is a saint and nobody should argue otherwise. As Christians, the only MESSIAH we have is JESUS CHRIST the sinless SON IN THE TRINITY. I saw a caricature of Jesus and the two robbers on the crucifixion cross where one of the #PO fanatical supporters likened #PO in the middle to JESUS CHRIST while the other two robbers were likened to Bola Tinubu and Atiku Abubakar. We all know that the robbers referred to in the Holy Bible were TRIED , CONVICTED AND SENTENCED. To the best of my knowledge neither Tinubu nor Atiku had been tried , found guilty and sentenced for the crime of robbery yet somebody posted such a HATE SPEECH without being cautioned. You don’t recklessly libel people who are your superiors by all standards in the name of marketing your favorite political candidate. That is a CLASSIC CASE OF BLASPHEMY which some fanatical Muslims in Nigeria refer to as RED LINES. Incidentally, both Tinubu and Atiku are devout Muslims. That is an example of RELIGIOUS TOLERANCE which supporters of the two gentlemen displayed as if nothing happened. Contrast it with what would have happened if #PO had been depicted as a ROBBER in similar vein. His supporters would have seized the airwaves pontificating on how blasphemous such a post was.

This is why supporters of #PO should be careful and exercise restraint in their dealings because they are almost DESCENDING INTO IDOLATRY without knowing it. Even the supposedly educated amongst them are guilty of this sad behavior. An example is the recent altercation between Rev Fr Mbaka and #PO. The #PO supporters are spinning different tales and scenarios to justify the actions of #PO even before he could narrate his own side of what transpired between them. How can you defend somebody without hearing from him. The best you are expected to do in the circumstance is to give him the BENEFITS OF DOUBTS until you hear from him. Some of the people jumping into the fray to defend #PO have not seen him physically talk less of interacting with him. How can you enter a fight for somebody blindfolded except as a Christian and you are fighting for JESUS CHRIST? At this rate, even a Bishop who criticizes #PO will be uninstalled. What is happening is a dangerous precedent which will come back to haunt us. It was not the first time that priests talked down on congregants and no Diocese has called them to order. The other day a renowned novelist was narrating her bitter experience in the hands of the her Parish priest at Abba , Anambra state during the outing church ceremony of her late mother. The circumstance and context were not different from what transpired between Rev Fr Mbaka and #PO. I am not aware that the church intervened at anytime to save her from vitriolic attack of the priest. She was left to her own devices and allowed to be feasted upon by the omniscient priest. What is the special interest of the Roman Catholic Church in #PO matter? Is he now more Catholic and more equal than others? What is happening now in the Church of Jesus Christ? This is called IDOLATRY, it is a A CRIME IN CANNON LAWS.

The Holy Bible says ; IF WE SAY WE HAVE NO SIN WE DECEIVE OURSELVES, THE TRUTH IS NOT IN US. #PO is not JESUS CHRIST, he is just a normal human being with inherent imperfections.

#PO was a two-term Governor of Anambra state(2006-2014) and his records of achievements should be available for all to see. So far, his mob of supporters would not want an independent verification of the much vaunted achievements. Anambra state is there for all to see and nothing can eclipse any achievement by the #PO government. The roads in Anambra state are riddled with potholes it not craters, there is no flyover in the state to attempt providing a solution to the excruciating traffic problems in the state especially during festivities when vehicular traffic swells. What is the state of public water supply in Anambra state? What is the drainage network system like? What did #PO do to the erosion menace that bedevils Anambra state? HOW MANY NEW ROADS, HOSPITALS AND EDUCATIONAL INSTITUTIONS DID #PO BUILD IN EIGHT YEARS AS STATE GOVERNOR? Dashing old people a peanut of N5,000 each and using it as justification for not doing what you are elected to do is an insult to our sensibilities. Dishing out falsehoods in the name of achievements is the height of INDECENCY. I challenge the supporters to list the achievements of #PO government that warranted the deafening hoopla justifying his candidacy. Forget about the awards because most of the awards you hear about are syndicated and fake. The best way to verify and confirm #PO achievements as erstwhile governor of Anambra state is to visit the state and see things for yourself. There is a saying that no one can ever cover a pregnancy with the hands to prevent It from showing. IT MUST SHOW!!! The supporters should stop making noise and show us this IMAGINARY ACHIEVEMENTS OF #PO INSTEAD OF RESORTING TO NAME CALLING. Anybody who wants to vote for #PO can do so but it is unacceptable to DECEIVE people with FALSEHOODS AND HIS IMAGINARY ACHIEVEMENTS. The current governor has just debunked the one on an alleged INVESTMENT OF $20M now WORTH $100M. WHAT KIND OF NICODEMUS LIE IS THIS?

Only the Almighty God knows the contents of our hearts, who is upright and who is not. We have a lot of morally upright people in Nigeria and I do not think that #PO is the most morally upright person around. So why the noises by his mob of supporters? I am from Anambra State, I know that #PO collected billions of Naira in unaccounted SECURITY VOTES and never fully conducted Local Government Elections throughout his eight-year tenure as the governor of the state. So what point are his supporters trying to make when they want people to believe that he is spotless? #PO is a decent man relative to the standard of the morass into which this country has descended but it puts me off for anybody to present him as a MESSIAH. It is a lie and when lies are repeated they assume the toga of TRUTH. I refuse to be bamboozled. IDOLATRY IS A MORAL SIN and it is condemned in the Bible or is #PO exempted from this injunction? #PO supporters are behaving like a typical mob. It was the action of the mob that forced Pontus Pilate to give in to their demands to have Jesus Christ killed despite his innocence of the crimes he was accused of committing. Mobs don’t reason and they don’t interrogate issues, they work on emotions. Your guilt or otherwise depends on which side of the mobs’ dominant sentiments you belong to at any particular time. Mobs don’t reason and it is futile arguing with a mob or making any mob to see reasons. Because #PO is an IGBO MAN, every Igbo man must support his cause whether he likes it or not? This is unacceptable to me and I will not lie because #PO is an Igbo man. The enablers and promoters of this evil do not care about the political sentiments and persuasions of other IGBO PEOPLE. We all know that it is not a good strategy to PUT ALL ONE’S EGGS IN ONE BASKET. Yet these people people find no wisdom in the time-honored counsel of risk dispersion and mitigation.

We all know that death is a necessary end but nobody supports SUICIDE because we know that SUICIDE IS NOT AN OPTION. No one argues with a mob which senses have taken flight. Once somebody is afflicted with the mob mentality, he reasons like someone in a trance or under a spell. When their idol is treated like a saint or god, it becomes foolhardy to bother to make the people concerned reason like human beings.