Man Killed for Protecting Symbols of Peaceful Protests in Belarus 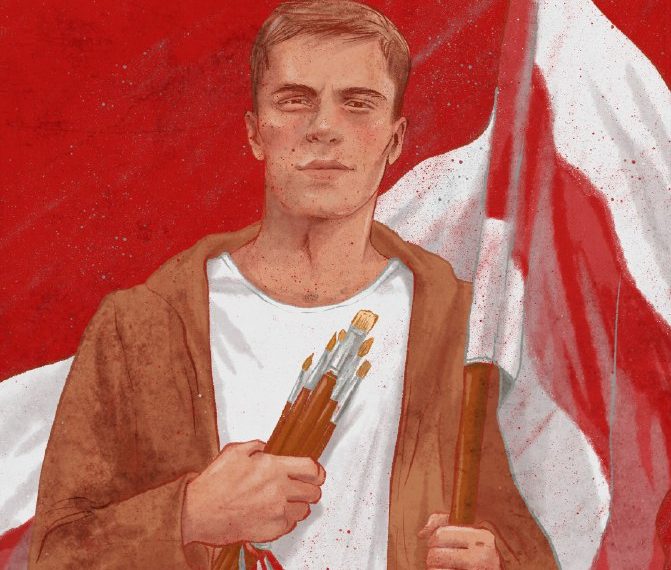 Man Killed for Protecting Symbols of Peaceful Protests in Belarus

A man, Raman Bandarenka died on Thursday, 12th November, as a result of a vicious beating by a group of unidentified assailants in the capital of Belarus.

Thousands of peaceful protestors across the country are demanding justice for his murder.

Belarus, officially the Republic of Belarus and formerly known as Byelorussia or Belorussia, is a landlocked country in Eastern Europe.

On November 11, a group of masked thugs showed up in a Minsk courtyard, known among protesters as the “Square of Change.” Like every other day since August, they came to tear down the white-red-white ribbons that have become a key symbol of the protests and paint over a mural on the wall. The mural celebrates two DJs, who were prosecuted for playing a song called We Want a Change! at a public event before the August 9 presidential vote. The mural is recreated after every attempt to destroy it.

According to several witnesses, at around 10 p.m., Bandarenka, 31, tried to stop people from taking down the ribbons. He wasn’t violent but at least two men started beating him and dragged him into their minivan, HRW reports.

Around midnight he was hospitalized with severe brain injuries. One day later, he died.

Belarus’ chief investigative agency claimed that the police found Raman Bandarenka in the street, severely beaten and with signs of being drunk, brought him to the Central police station and called the ambulance. The agency stated that a preliminary inquest into his death is underway.

Belarusian people have many reasons to doubt the investigation into this heinous killing will be prompt and effective. Since the beginning of protests in August, thousands of peaceful protesters have been detained; hundreds reported torture and other severe forms of ill-treatment. Despite systematic and well-documented abuse, authorities have not opened a single criminal case in relation to the police abuse against protestors.

The death of Bandarenka is another horrifying reminder that impunity for gross human rights violations serves to perpetuate abuses. International inter-governmental organizations, including the EU, the OSCE and UN agencies, should redouble their efforts to ensure accountability for violations against peaceful protestors in Belarus and support the protestors in their demands for justice.

Statement by the Spokesperson on the death of Raman Bandarenka

On 12 November, 31-year old Raman Bandarenka died after several hours of surgery in a hospital in Minsk due to serious injuries caused, according to reports, by the brutality of plain clothed policemen. This is an outrageous and shameful result of the actions by the Belarusian authorities who have not only directly and violently carried out repression of their own population, but also created an environment whereby such lawless, violent acts can take place, thus ignoring not only the fundamental rights and freedoms of the Belarusian people but also disregarding their lives.

The European Union expresses its deepest condolences to Mr Bandarenka’s family and friends. The EU stands in solidarity with all the Belarusians who have suffered and continue to suffer at the hands of the Belarusian authorities in the aftermath of the 9 August falsified presidential elections.

The EU continues to strongly condemn violence employed by the Belarusian authorities against peaceful protesters, persons engaged in the pro-democracy movement, independent media, representatives of civil society or ordinary Belarusian citizens. We expect the authorities to end the violence and persecution, to release immediately and unconditionally all arbitrarily detained persons, including political prisoners, and to investigate fully and transparently all human rights violations and abuses, and hold those responsible to account. The European Union has already imposed sanctions on 55 individuals responsible for violent repression and intimidation, and stands ready to impose additional sanctions.

Advice or I Divorce! My Wife hardly stays at home