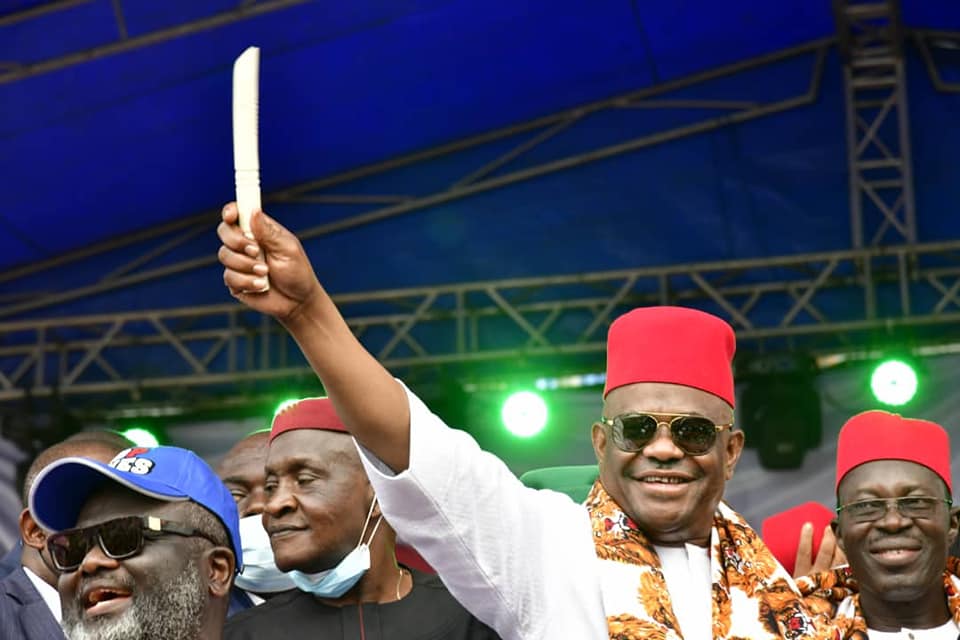 Rivers State governor, Nyesom Ezenwo Wike has told leaders and delegates of the Peoples Democratic Party (PDP) in Abia State to trust him as the only presidential aspirant who has the capacity to defend the interest of Ndi Igbo.

Governor Wike, who is also a presidential aspirant of the PDP met with the leaders and delegates of the party at Abia State Government House, in Umuahia on Friday to solicit their support ahead of the party’s presidential primary this month.

Wike stated that he would not be that kind of a leader who would be lost on the opportunity in public service to address social injustice and other forms of unfair treatment that people suffer in Nigeria.

He reiterated his belief in the restructuring of Nigeria and is determined to be the first to start the process to strengthen the sense of belonging among Nigerians.

“I say so with all amount of seriousness and I challenge anybody who is from the Southern part of Nigeria; who is from South-South, who is from South-East to say so boldly too. Check all of us, look and determine who can even defend the interest of Ndigbo better than me?

“Ask them, when they were in power, what did they do? How many of them have spoken out? Look, don’t waste your votes on such people.”

Wike observed that things have fallen apart in the country because those of the All Progressives Congress (APC) who control the Federal Government lack such capacity.

He said he is prepared to effectively and productively take drastic decisions and do so courageously in order to promote national good.

The Governor assured that in solving Nigeria’s numerous problems, he would also provide requisite logistics, and other support to the security agencies to enable them curb insurgency and activities of bandits within a given timeline.

On his part, governor of Abia State, Dr Okezie Ikpeazu, who had earlier hosted governor Wike on a courtesy visit, said they have found in the presidential aspirant a leader who is consistent, with a character and trust worthy.

Dr. Ikpeazu said Nigeria is in a precarious situation with a bleak future and requires governor Wike to forge national unity, rescue the country and stabilise socioeconomic development.

He assured the presidential aspirant that Abia state delegates will support him.

Also speaking, former governor of Gombe State, Hassan Dakwambo noted that Wike is truly a tested politician who is prepared psychologically and physically to be the best president of Nigeria.

Abia State PDP chairman, Dr. Alwell Asiforo Okere informed that most delegates are governor Wike’s converts because they believe in the leadership that he would offer following from what he had accomplished in Rivers State.