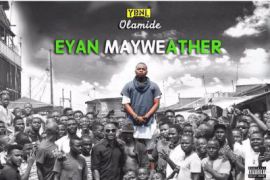 Olamide Badoo, currently known as “Sneh” is set to prove a point with his new album which will drop on November 23rd, 2015.


This will be a big record in Nigeria and Africa as a whole as he will ‘feature’ no artiste on this.

The a album titled “Eyan Mayweather” broke social media yesterday as it cover was unveiled and its still trending very high.

This will be his 5th Studio Album and would consist 21 tracks.

One would expecting him to feature “Party Doctors” like Ice prince, Lilkesh, Papenazi, Davido, Victoria Kimani, Sarkodie , Pranco, Wizkid, Harry Song, and so on, but the boss say no, I will release 21 tracks and it will just be me, just my voice you hear.

What do you think?

8 ways to control Blood Pressure (BP) before seeing a Doctor

About rarest Blood Type, The Rh Null or Golden Blood only found in 43 people accross the World

Interesting reasons you should add Cabbage to your Daily Diet

TYPES OF REST THAT EVERY PERSON NEEDS

My Womb is Precious, Can’t get pregnant for a Broke Man – Lady

Man disguises self as Hookup Girl to satisfy men in Ghana

How a Child-rape Victim got suspended by Chrisland Schools

Man who once stole Agric Note, returns for forgiveness after 15 Years