Ooni of Ife: I Don’t want to be king over dead bodies 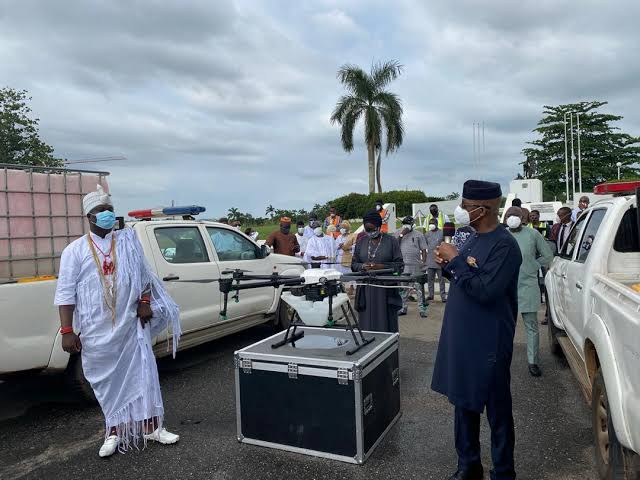 Oba Ogunwusi spoke in Akure where he donated motorised modular fumigators and drone to the Ondo State government to help fight COVID-19.

The Ooni of Ife stated that it became necessary for him to assist state government check the spread of COVID-19 because he does not want to be king over dead bodies.

He said the drone was meant to fumigate areas not accessible by vehicles adding that the state government would only use the drone for a period before returning it.

Oba Ogunwusi said the fumigators were fabricated locally by an Osun State indigene based in Ondo State, Mr. Victor Badejo, and all the materials used for the equipment were sourced locally.

According to Ooni, “Nigerians should look at how the citizenry could explore all available resources for the development of the nation after the pandemic is conquered.

“The mixtures used for fumigation were put together by Obafemi Awolowo University’s Prof. Olapeju Esima, a World Health Organization (WHO) consultant.

“I appeal to Nigerians to adhere strictly to all the precautionary measures being handed down by the government to prevent the spread of the dreadful virus.”

Governor Akeredolu who appreciated the monarch for the donation hinted that plans were on for the popular Shasha market in Akure to be closed down for not adhering to laid down procedure to curb spread of COVID-19.

Akeredolu who described the Ooni as a great blessing to the nation said he visited the market and prayed that COVID-19 does not break out there.

He expressed interest in acquiring more of the locally mortised modular fumigators from the manufacturer.

“You know how serious this pandemic is. This morning we were at Shasha, we saw how people were behaving. No social distancing. No use of nose mask. We hope nothing breaks out in that place. They have promised to close the market and open twice a week.”

Why WHO will never accept Madagascar coronavirus remedy

Your Woman got raped and enjoyed it... Your reaction

Your Woman got raped and enjoyed it... Your reaction