THE Vol. 3 of Rihanna ‘s Savage X Fenty fashion show, released on Amazon on Friday, September 24, has been slammed for “cultural appropriation” by people who were upset by seeing white models wearing braids.

The show was incredibly diverse, but while many people have praised Rihanna’s lingerie show for its celebration of all kinds of bodies, as well as the show’s creative direction, some people wondered why the show had Vanessa Hudgens and Emily Ratajkowski sport braids during their scenes. Neither Hudgens nor Ratajkowski are Black women, and many believe the choice of hairstyle is an appropriation of Black culture – traditionally worn by Black women.

Ratajkowski walked down the catwalk to “Lemon” by N.E.R.D featuring Rihanna. One TikTok user called Dee who runs the worst.western420 account, which has 1.9 million followers, took issue with the fact Ratajkowski appeared while the line “Mad ethnic right now” played. The TikTok has been watched 1.4 million times and received 235,000 likes.

Many expressed their opinions on social media, tweeting that white women wearing their hair this way constitute cultural appropriation.

“I wish I could write something as funny as Rihanna putting all these white girls in braids for the fenty show,” tweeted comedy writer Raina Morris.

However, others showed appreciation that there were so many women wearing braids and celebrating the hairstyle. 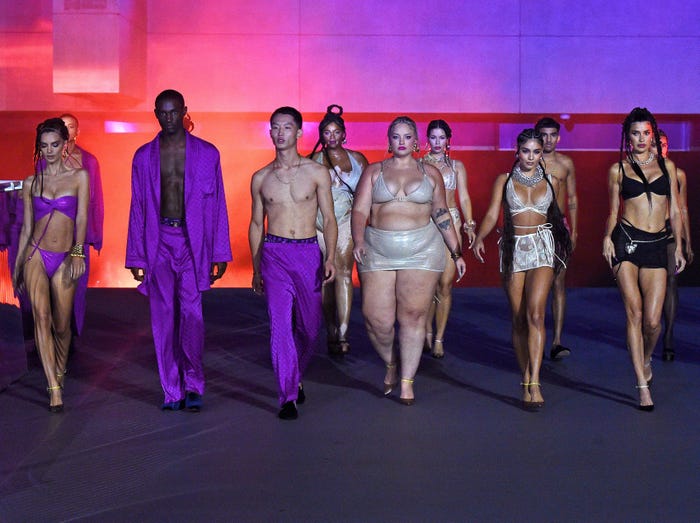 One user tweeted, “Loving everything about this show except why are white women in braids??? Rihanna?? What’s good!? I need answers.”

Another added, “Rihanna really loves putting non black ppl in braids for her fenty whatever show and then call it ‘mad ethnic right now,’” while a third wrote, “Not Rihanna letting nonblack ppl wear braids for her lil underwear line fashion show.”

Over the years, many stars — from Shay Mitchell to the Kardashians — have been called out for appropriating Black culture with their hairstyles. The controversy stems from the fact that non-Black celebrities are celebrated for a choice of hairstyle created by and typically worn by Black people, while the Black community has not received the same accolades or credit for the look — and is sometimes even criticized for the same style choices. (For example, when Zendaya wore dreadlocks on the red carpet in 2015, a fashion commenter said it looked like her hair smelled “like weed.”)

However, what’s unique about this situation is the fact that Rihanna — a Black woman — likely had the final creative word in how these women were styled, which is part of the reason why the internet is so perplexed.

A previous Savage X Fenty show in October 2020 was accused of cultural appropriation for including a song that offended some Muslim people. Coucou Chloe’s “Doom” played during a performance, containing samples from Hadith — a type of Islamic scripture.

Rihanna was called out on social media by people of the Muslim faith, saying it was “disrespectful” and “a mockery” to their religion.

Rihanna apologized, admitting it was a “huge oversight that was unintentionally offensive.”

“I would, more importantly, like to apologize for this honest yet careless mistake. We understand that we hurt many of our Muslim brothers and sisters, and I’m incredibly disheartened by this,” she wrote on Instagram.

Rihanna has not yet responded to the latest criticism. Insider has reached out to representatives of Rihanna for comment.

Jeju Loveland Park: Where All Statues Have Sexual Connotations