The man who is said to be from a Family in Edoji Community was paraded before members for allegedly abusing a teenager.

According to Anaedoonline’s anonymous source, the 52-year-old man have a long history of engaging in homosexual acts. Saying that whenever EDO WHITE sleeps with any man or boy, the persons will automatically suffer from epilepsy.

The source claimed that the acccused confessed making charms in his attempt to become rich which unfortunately failed him.

EDO WHITE after been subjected to questioning by Edoji Community Security confessed that he has slept with about three boys who are now suffering from epilepsy. 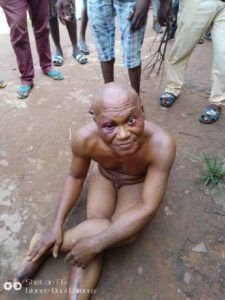 He has been handed over to the Nigeria Police Force in Nnewi.

Homosexuality is considered taboo across much of Nigeria’s conservative society and has been outright banned at an institutional level. Nigerian courts criminalized same-sex relationships in 2014 under a bill signed by then Nigerian President, Goodluck Ebele Jonathan.

Same-sex acts are also punishable by fines and up to 14 years in jail, while public displays of affection are punishable by up to ten years in prison.

Plainly, Nigeria does not allow or recognise LGBT rights. There is no legal protection against discrimination in Nigeria—a largely conservative country of more than 170 million people, split between a mainly Muslim north and a largely Christian south.

In December 2019, Forty-seven men went on trial for public displays of affection with members of the same sex, an offence that carries a 10-year jail term in the country.

The men were among 57 arrested in a police raid on a hotel in the impoverished Egbeda district of the commercial capital, Lagos, in 2018.

FREE PETROL TO SECURITY AND GOVT. AGENCIES IN ANAMBRA

FREE PETROL TO SECURITY AND GOVT. AGENCIES IN ANAMBRA