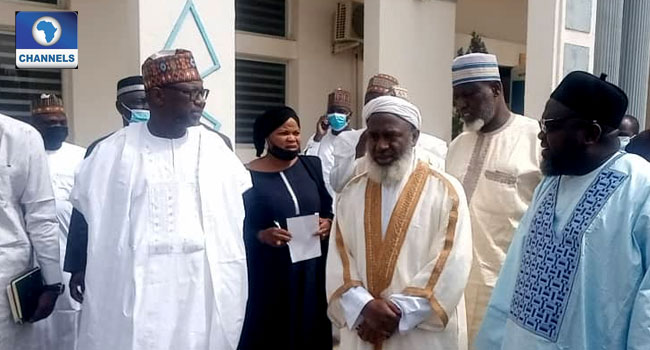 Popular Islamic scholar, Sheikh Abubakar Gumi, has called on the Federal Government to give bandits willing to make peace ‘blanket amnesty’ if the current security situation must be tackled.

The Islamic scholar disclosed this on Friday while addressing journalists in Minna, Niger State capital.

Blanket amnesty, according to PolitiFact, suggests “a formal, legal act, in which the government pardons a group for violating immigration policies and allows them to obtain permanent residency”.

“The Federal government should give them blanket amnesty, then if somebody continues, then we will deal with them,” Sheik Gumi said while giving updates on the demands of the bandits.

This was after the cleric visited the camp of some bandits operating in Niger State.

He explained that some of the complaints of the bandits are that they were being killed and maimed unjustly.

“The outcome (of his visit) is very positive. We have many factions and each faction is saying I have complaints and grievances – we are persecuted, we are arrested, we are lynched -,” the cleric said, quoting the bandits.

This is also looking like a ‘continuation’ of the July, 2019 statement by the General Officer Commanding, 7 Division, Maj. Gen Abdulmalik Biu, that repentant terrorists who lay down their arms stand the chance of becoming great in society and even emerging as the President of Nigeria.

“Boko Haram should lay down their arms unconditionally and be accepted in their community; opportunities are out there for them. They can be rehabilitated. An ex-Boko Haram member who has laid down his arms and turns away from negativity stands to become the President of this country and take up any position in this country.

“Why is he wasting his time when he cannot even deliver? But we have appealed to them including their collaborator to see reason to drop their arms as quickly as possible so that we can once again re-occupy our position in Nigeria and Borno State.”

Moreso, speaking concerning his discussion during his secret visit to the bandits, Sheik Gumi said there is a positive response from the bandits who are holding the Kagara school students and their staff captive.

He, however, did not state if the students have been released.

Gumi’s comments come a few days after gunmen gained access to Government Science College, Kagara, Rafi Local Government Area of Niger State around 2:00am and abducted scores of students, teachers, and many others.

The school principal who escaped from the attack confirmed to Channels Television that the gunmen came in military uniform and shot sporadically into the air. He said the operation started from the staff quarters where they abducted members of staff including a couple before they gained access to the students’ hostels.

One student was killed during the attack.