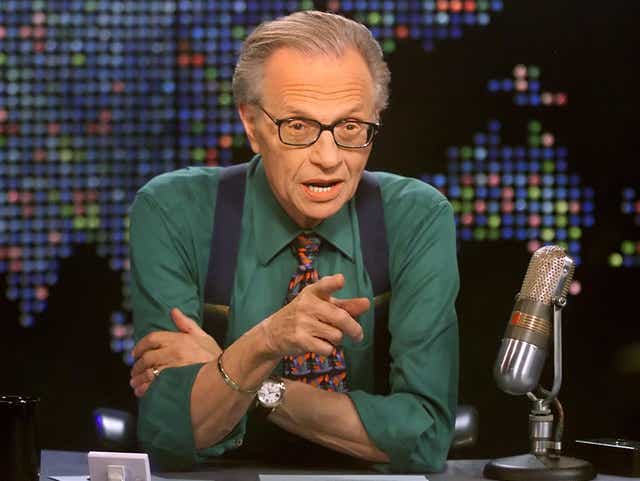 King had been hospitalized with COVID-19. He passed away Saturday morning at Cedars-Sinai Medical Center in Los Angeles, according to Ora Media, a production company King founded with Mexican media mogul Carlos Slim. 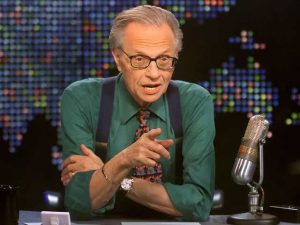 “For 63 years and across the platforms of radio, television and digital media, Larry’s many thousands of interviews, awards, and global acclaim stand as a testament to his unique and lasting talent as a broadcaster,” the company said.

Over the course of more than five decades years in radio and TV broadcasting, half of it spent hosting CNN’s “Larry King Live,” King mingled with the famous and infamous, and average people who became either.

By his count, he interviewed well over 60,000 subjects, and when his run on cable ended in 2010, he segued to the Internet with “Larry King Now,” a daily talk show on Hulu from Ora TV, and became an active presence on Twitter.

He vowed never to retire and to keep interviewing until he died. But King was not immune to other illness: 30 years after undergoing quintuple heart bypass surgery, which prompted him to quit a lifelong three-pack-a-day cigarette habit and lose weight, a 2017 checkup revealed a cancerous lung tumor that was removed with surgery.

Talk show host Larry King is shown on the set of his program ‘Larry King Live’ at the CNN studios in Los Angeles in March 2005.

Talk show host Larry King is shown on the set of his program ‘Larry King Live’ at the CNN studios in Los Angeles in March 2005.

FILE PHOTO/THE ASSOCIATED PRESS
He revealed he had a stroke in March 2019, was in a coma for weeks and considered suicide. “I thought I was going to bite the bullet; I didn’t want to live this way,” he told an interviewer at Los Angeles station KTLA. In April of that year, he had an angioplasty after complaining of chest pains. But once again, he recovered and kept working.

Near the end of 2020, King landed in Cedars-Sinai Medical Center with COVID-19. Hospital protocols prevented his family from visiting him. He was moved to the ICU on New Year’s Eve and was receiving oxygen but moved out of the ICU in early January and was breathing on his own, said David Theall, a spokesman for Ora Media, said at the time.

The author of several books, King started his career in Miami radio before moving on to TV and newspapers. His nightly CNN program, which premiered in 1985, remained the network’s top-rated show throughout his tenure, which ended in 2010.

While some traditional journalists tended to dismiss him as a celebrity interviewer who didn’t ask tough questions, the truth was a good deal more complex.

“King was one of the few people in broadcast history who basically created his own phenomenon,” said Tom Rosenstiel, executive director of the American Press Institute. “He didn’t need a network. The network needed him.”

He added: “He coaxed, rather than challenged, and the result, while not always groundbreaking, was always interesting and smart. His dirty little secret was he was a much more intelligent guy than he let on, and a much better listener than most people in television. But he really believed that his guest was the star, and his job was to help reveal that.”

Larry King speaks out: His children Andy and Chaia die within weeks of each other.

“I’ve interviewed everybody once,” he wrote in a 2011 book, “Truth Be Told.” “How did I miss Bruce Springsteen?”

The end of his show came unexpectedly. “Over and over, the execs had told me, ‘You’re here as long as you like,'” he wrote, recounting a meeting in which he’d been given a few months’ notice and promised a series of four yearly specials (later scrapped).

He blamed CNN for installing a former guest, Joy Behar, as host of a competing show on its Headline News Network: “My own network was cutting into my ratings and then wondering why they were falling,” he wrote. He rued the changing face of TV news: “People are tuning into cable news now not so much to get educated as to be entertained and have their own political opinions reinforced.”

And he recalled one of his final guests, Conan O’Brien, who had just endured a messy exit from NBC: “It was good to talk with someone who could tell me what it was like to be on top of the world one minute and off the air the next,” though “Conan felt screwed about being replaced. I didn’t.” However, he was puzzled by the choice of his replacement, Piers Morgan, whom he knew only as a judge of “America’s Got Talent.”

Larry King photos through the years
King admittedly had ups and downs in his personal life. The son of an Austrian immigrant who had settled in Brooklyn, N.Y., he was born Lawrence Harvey Zieger. King has talked about surviving as an “acne-faced” overweight child entertaining classmates by imitating famous radio personalities. His father died of heart disease at 44, impoverishing the family.

King’s break came on a radio station in Miami, doing a night-time interview show. A Miami Herald column followed, in which King talked up stars performing at Miami Beach hotels, such as Frank Sinatra. His weekly musings column ran in USA TODAY from 1982 until 2001.

King described his early years as often chaotic, ruined by his wild spending on cars, gambling and women. He was married eight times to seven wives, earning him a reputation as a womanizer. (He filed for divorce from his most recent – and seventh – wife, Shawn Southwick, in 2010; they later reconciled, but he filed for divorce again in 2019.) Constantly in debt and borrowing from friends, he at one point ended up being charged with grand larceny after he failed to repay a $5,000 loan from a friend.

He had five children: Andy and Chaia, the two conceived with his third wife, Playboy bunny Alene Akins, died within weeks of each other in 2020, at 65 and 51, respectively.

Along with his trademark suspenders, King was known for his live interviews and viewer call-in segments. And he never seemed to run out of questions.

“I don’t even understand it myself,” he told Toronto’s Globe & Mail in 2003. “It’s incessant with me. Who, what, where, when, why, never leaves me. I’m just insatiably curious, which helps in my job. I’m the kind of person you don’t want to sit next to on an airplane. I’ll drive you nuts!”

“He will be missed by so many CNN employees past and present,” CNN anchor Jim Acosta wrote on Twitter.

Obas, others flogged in Ogun State for rejecting Fulani Herdsmen

Obas, others flogged in Ogun State for rejecting Fulani Herdsmen