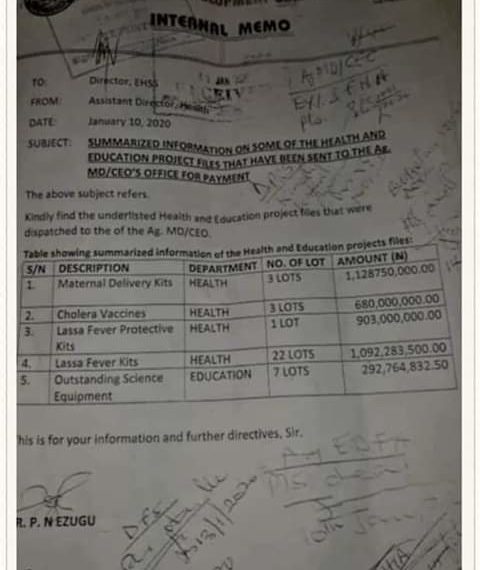 In a letter dated April 6, 2020 with a Ref number NDDC/MD/HPU/20/4/EHSS/05 seen by SaharaReporters, it was revealed how the commission approved N5,474,647,125.00 for procurement of Personal Protective Equipment for health workers and provision of community-based sensitisation campaign against the spread of COVID-19 to a company named Signora Concept Services Limited.

The Niger Delta Development Commission is currently reeking of a multi-billion naira fraud involving the board and top management members of the agency over the purchase of Personal Protective Equipment and sanitizers to tackle Coronavirus in the nine states making up the region.

In a letter dated April 6, 2020 with a Ref number NDDC/MD/HPU/20/4/EHSS/05 seen by SaharaReporters, it was revealed how the commission approved N5,474,647,125.00 for procurement of Personal Protective Equipment for health workers and provision of community-based sensitisation campaign against the spread of COVID-19 to a company named Signora Concept Services Limited.

The letter reads, “This is to notify you that based on your tender for emergency procurement of specialized medical Personal Protective Equipment for health workers and provision of community based sensitization campaign against the spread of COVID-19 and other communicable diseases in the nine state of the Niger Delta region, the contract has been awarded to you at the total cost of N5,474,647,125.00 only inclusive of 7.5 VAT as corrected and modified in accordance with the instruction to tenderers by the Niger Delta Development Commission.”

The letter was signed by Alex Ndudi Enebeli, Head of Procurement Unit for the Acting Managing Director of the NDDC. 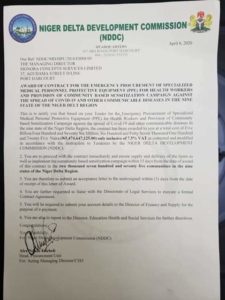 Even though the company was given 15 days to deliver all items stated in the letter, findings by SaharaReporters showed that Signora Concept Services Limited was yet to deliver any equipment to a single state in the Niger Delta region 18 days after the contracted was awarded and payment made.

“Apart from N70m donation made by the NDDC about a month ago, we are yet to receive any single health equipment from the commission.”

“Though we were promised ventilators, we got a letter later from them that it won’t be possible again.”

Checks by SaharaReporters also revealed that the NDDC had in January 2020 released the sum of N4,096,798,332.50 for the supply of Lassa Fever equipment that were never delivered. 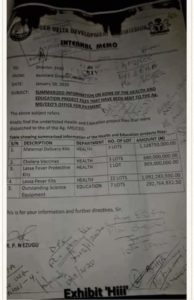 Infuriated by the level of fraud going on in the agency, a Niger Delta socio-political organisation, the Ijaw Intellectual Advocates, has asked President Muhammadu Buhari to sack the Minister of Niger Delta, Godswill Akpabio.

National Coordinator of the group, Salaco Yerinmene, said the fresh contract approved by the NDDC interim management committee was done to defraud the people of the region under the guise of purchasing COVID-19 PPEs and sanitizers that will never be delivered to any community under the nine states making up the oil-rich region.

He said, “We have clearly realised that the IMC Akpabio constituted and placed under his supervision was to jeopardise the commission and continually pillage the treasury of the Niger Delta people which must be resisted by any means necessary.

“While we leave the reading public to guess as to the motive behind this contract, we will like to ask some questions begging for answers.”

“Why should Akpabio and IMC give priority to projects that are not bothering the Niger Delta people?”

“How many communities in the Niger Delta region were sensitised through this medium over the spread of Coronavirus since the outbreak of the disease?”

“If the affirmative to question 2, then where did the money go into?”

“Why not use the money to construct major roads across the coastal communities or use the fund to provide potable water to the various communities?”

“Mr Akpabio should know that as young intellectuals, we are aware of the game he is playing in looting the commonwealth of the people and he should also be aware that his days are numbered.”

“It is in Akpabio’s best interest to resign and summit himself to the EFCC, else we shall have no other option than to fight to the latter.”

“We are again reiterating our stand that Akpabio must and should be suspended and be investigated by the EFCC and the forensic audit should commence immediately, otherwise the crude oil from all Ijaw territories shall never be used to fund the present corruption going on at the NDDC.”

It is not the first time fraud of this magnitude would be uncovered in the NDDC, it is in fact among a long list of similar cases.

In January this year, the interim management committee of the commission announced the discovery of fraudulent contracts worth N1rn.

According to the committee, at least 1,921 ‘emergency contracts’ were sanction by the former management of the agency despite its annual budget being only around N400bn.

A prominent activist in the region, who asked not to be named, told SaharaReporters on Friday that the NDDC had always been used as conduit by powerful persons in government to siphon huge public funds and deprive the people of developmental projects that could have changed their lives for the better.

He said, “The NDDC has been more of a curse for the people of Niger Delta than a blessing. All the big politicians do is to use the agency to milk people of the region by stealing funds meant for development of the region and thereby deny them of the basic infrastructure and amenities that could have raised the quality of their lives. It is a cesspool of corruption.”

THE TRUTH ABOUT COVID-19 IN NIGERIA