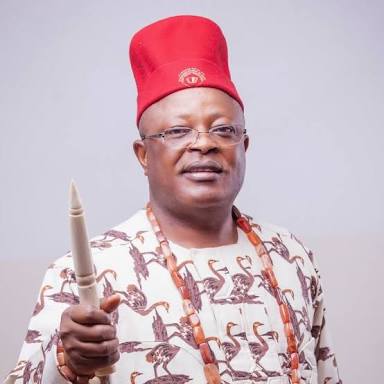 Governor Dave Umahi of Ebonyi State says the Indigenous People of Biafra, IPOB, should not be welcomed in the Southeast due to their negative activities.

The governor, who is also vying for the sole presidential ticket of the All Progressives Congress, APC, stated this while playing host to leaders and members of the Nigeria Guild of Editors in Abakaliki at the weekend.

According to Umahi, the agitation by the secessionist group is unhealthy for the region, revealing that he had raised the alarm while still a member of the Peoples Democratic Party, PDP.

He explained that IPOB succeeded in deceiving the Igbos that the geo-political zone is infiltrated with strangers, alleging that they also engage in hate speech.

Umahi said, “There is extreme politics in this region and it must stop, when we started especially before my defection, we were all working together and I was championing it that IPOB is not good for us because of the kind of agitations that were being meted out was not correct.

“First hate-speeches and from there it developed to violence and they have continued to lie to our people that our place has been infiltrated, it is a lie, it is South East killing South East people and the security people and until we are bold to say this, it will continue”.

The frustrated Chairman of South-East Governors’ Forum, Mr David Umahi also lamented insecurity in the South-East and blamed it on what he described as unnecessary politics among leaders in the region.

Umahi also blamed the Prof. George Obiozor-led Ohanaeze Ndigbo for the failure to politically resolve the case of the detained leader of Indigenous People of Biafra, IPoB, Mazi Nnamdi Kanu, saying that the apex Igbo socio-cultural body refused to follow up the discussions established by the South-East Governors with President Muhammadu Buhari for a political solution for Kanu’s case.

The governor, who spoke in Abakaliki at the weekend while hosting members of the Nigerian Guild of Editors, NGE, regretted that unnecessary politics had scuttled all security and peace efforts initiated by leaders in the South-East.

On why South-East Governors appear not to be working together to tackle the security challenges in the region and other cooperation, Umahi said they are working together but added that each state has its own problems and priorities.

His words:” When it comes to security, I must tell you in all honesty, there is politics in our security situation in this region. Do we say all the governors are bonded towards tackling security challenges? The answer is no. There is extreme politics in this region, and it must stop for the sake of our people”.

“When we started, we were all working together and I was the person championing against the activities of IPoB, that the agitation is not good for our people, that the kind of agitation being meted out was not correct; the kind of hate speech, and from there it developed to violence and we continued to lie to our people, oh they have infiltrated, not true. It is the South-East killing south – easterners and security people, and if we are not able to speak our it would continue”.

Umahi described sit-at-home as nonsense and advised Igbo to be wise. “It is useless and nonsense because even if there were to be Biafra, Ebonyi will not be part of Biafra. I have said it and I will continue to say it”, he stated.