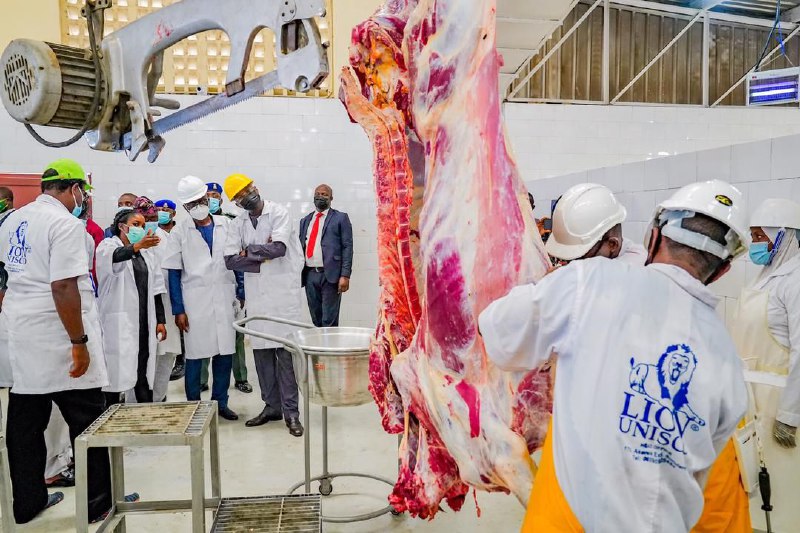 The Lagos State Government on Friday inaugurated a semi-mechanised abattoir in Bariga as part of efforts to improve red meat value chain in the state.

Also, present at the event were the Minister of Works and Housing, Mr Babatunde Fashola, the Lagos State Commissioner of Agriculture, Ms Abisola Olusanya, the Permanent Secretary of the state’s agriculture ministry, Mr Hakeem Adeniji and other stakeholders in the industry.

Sanwo-Olu expressed excitement over the inauguration of the abattoir and reassured his administration’s support to boost the red meat value chain in the state.

“I am truly excited not to have missed this simple but very significant event.

“The inauguration of this abattoir is a testament to the Lagos spirit of resilience, hard work and commitment.

“Lagos consumes more than 50 per cent of red meat produced in the country, so we have to give back to our people by ensuring the quality of our red meat value chain.

“Today in Lagos, we have about 16 abattoirs of which the state government runs 11. We do not just want to own them, we want to double the numbers.

“We want to encourage more investors into the sector. I have given an approval to employ about 20 to 25 additional veterinary doctors in the Ministry of Agriculture so that we have all we require for this industry,” he said.

Also speaking, Fashola, commended the state government on its achievement in the sector.

“I have nothing but commendation for Sanwo -Olu, the commissioner for agriculture and the permanent secretary for providing the enabling environment to ensure the actualisation of the mechanised abattoir.

“The essentials of progressive politics is the improvement of the human condition.

“From a local butchery by Alh. Ninilowo’s father, he has now developed a semi-mechanised abattoir.

“From privy information, soon this abattoir will procure a value- chain meat processing machine where sausages and ham burgers will be processed as the next stage of investment and cold storage.

“This abattoir will be able to employ 800 persons and reduce the number of the unemployment in the state,” Fashola said.

In her welcome speech, the state Commissioner of Agriculture, Ms Abisola Olusanya, read the riot act to illegal butchers, stating that the state would no longer condone their activities.

“Lagos being a large market for the red meat value chain, there is a need to have more abattoir in the state owing to population growth.

“Owing to the COVID-19 pandemic which started at a meat market in Wuhan, China, there is a need to have our meat slaughtered and processed under hygienic conditions, marketed and transported the right way.

“Hence, the partnership of ‘the Lagos State government with private investor like Alh. Olayiwola Niniola to ensure we have fully mechanised abattoirs in the state.

“We enjoin all our butchers to patronise our semi and fully-mechanised abattoir because the state will not tolerate the slaughtering of animals on the floor,” she said.