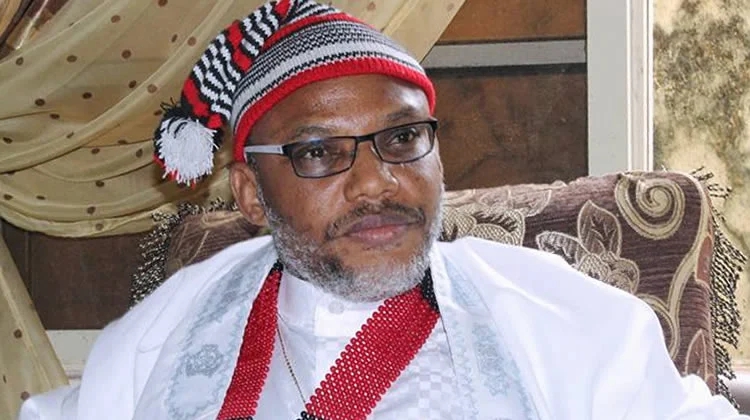 The Ohanaeze Ndigbo Youth Council (OYC) has accused Nigerian security agents of stripping naked and manhandling Igbo women who came to show their solidarity with Nnamdi Kanu, leader of the Indigenous People of Biafra (IPOB), at the Federal High Court, Abuja on Wednesday.

The group demand an apology from security agencies for the alleged assault.

It described the actions of the security personnel as sacrilegious, noting that they smacked of hatred for the Igbo people.

The youths also alleged that security agencies watch them and do nothing as Igbo people and their businesses are attacked across the country.

The group in a statement signed by its National President, Comrade Igboayaka O. Igboayaka, titled: “Nnamdi Kanu’s Case: Security Agents Assaults Igbo Women, Hit Them With AK-47 Rifle Weapons- Ohanaeze Youth”, accused the security agencies of being behind the crisis in South-East to destroy the region.

He regretted that the country is fast becoming a ‘banana republic’ where the dignity of human life is easily reduced to nothing while violation of human rights is the order of the day in the hands of security operatives.

He said, “The Igbo women and mothers who stood about one kilometre away from the Federal High Court, close to Blue Springs Hotel, Abuja became objects of security brutality when the troops of Nigerian security agents sprayed tear gas on the aged mothers, marched the women on the ground while hitting them with guns and left them with bruises because they were Igbo.

“In the process, some of the women were stripped naked by security men. This is completely unacceptable; a taboo to womanhood and a slap at the dignity of Nigerian women. This adds to the series of anti-social reasons why Nigeria is counted among the unsafe places to live in the world.

“The behaviour of security personnel on Igbo women today is a challenge to women groups, the National Assembly and the global community. People have a right to movement and association, but the case of Nigeria is fast becoming different.

“Nigeria is drifting into a state of lawlessness where fundamental human rights are serially abused, especially by security agents and this truism accounts for why Nigeria is leading in abuse of human rights violation globally.”

The Youth group, however, called on the International Human Rights Watch, Amnesty International and all the global human rights community to beam their searchlights on the ugly events in Nigeria, especially the ongoing killings in the South-East.

The group lamented the intimidation, marginalisation, injustice, and human rights abuses against Ndigbo, identifying them as some of the issues that led to the quest for secession.

It said instead of improving the situation, the Nigerian government has worsened it and pushed the country to a state of near collapse.