US President Donald Trump will preside over an event to mark 4 July celebrations at Mount Rushmore, despite concerns over coronavirus.

Mr Trump will give a speech at the South Dakota landmark, which features the carved faces of four US presidents.

He is expected to denounce “cancel culture”, and the toppling of monuments during recent anti-racism protests.

A fireworks display will be held at the pre-Independence Day event, attended by 7,500 people.

Masks will be available but not required, and social distancing will not be strictly enforced.

Mr Trump, who has promised “a tremendous 3 July”, has faced criticism for holding the event at a time when coronavirus cases are surging to record levels in the US.

The president’s visit has raised fears over the potential spread of Covid-19, wildfire worries linked to the fireworks, and protests from Native American groups.

Speaking to Fox News this week, South Dakota’s Republican Governor Kristi Noem said free face masks would be available at the outdoor event for people who chose to wear them, but “we won’t be social distancing”.

“We told those folks that have concerns that they can stay home,” she said.

According to CNN for President Trump, nothing could be more natural than to stand alongside such giants of American history.”

“Such frivolity might seem in poor taste amid a fast-worsening pandemic — and unwise since social distancing won’t be required at the event. But the holiday that celebrates independence from Britain is being used to bolster Trump’s false narrative that the country is doing just fine.”

“We’re headed back in a very strong fashion … and I think we are going to be very good with the coronavirus,” Trump told Fox Business on Wednesday, a day after his government’s top infectious disease specialist, Dr. Anthony Fauci, had warned that the US could soon see 100,000 new cases per day.

The Mount Rushmore state, South Dakota, has not been as badly hit by the virus as much of the rest of the heartland. But it only takes one infected person in what is expected to be a big crowd to seed new outbreaks.

Basically, what is Trump expected to say?
Mr Trump will deliver a speech in the shadow of George Washington, Thomas Jefferson, Theodore Roosevelt, and Abraham Lincoln, whose heads are carved into the granite of Mount Rushmore.

A Trump campaign official said the president, who has condemned the removal of statues by protesters, will rail against people trying to “tear down” the United States.

“The left wing mob and those practicing cancel culture are engaging in totalitarian behaviour that is completely alien to American life – and we must not accept it,” the official said, summarising Mr Trump’s expected comments.

Mr Trump is expected to make a speech in the shadow of Mount Rushmore.

These will be the first fireworks at Mount Rushmore in over a decade, after a ban was imposed over environmental concerns.

Mr Trump has predicted a “fireworks display like few people have seen” in South Dakota, a state he won in the 2016 US election.

The monument is surrounded by a national forest and some fear the display could set off wildfires in the dry brush, though local officials have said the risk is low.

Friday’s event is the latest to be held by President Trump during the coronavirus pandemic, as he attempts to fire up his supporters ahead of November’s presidential election.

On Friday, the US recorded its largest single-day total of new coronavirus cases since the start of the pandemic.

Meanwhile, drama has started around Mount Rushmore as protesters stand by and the police have not lost sight.

Protesters blocked a road leading to Mt. Rushmore. Native Americans were protesting that South Dakota’s Black Hills were taken from the Lakota people against treaty agreements and chanted “Land back!”

Also, social distancing and COVID-19 practices have been properly defiled by spectators. 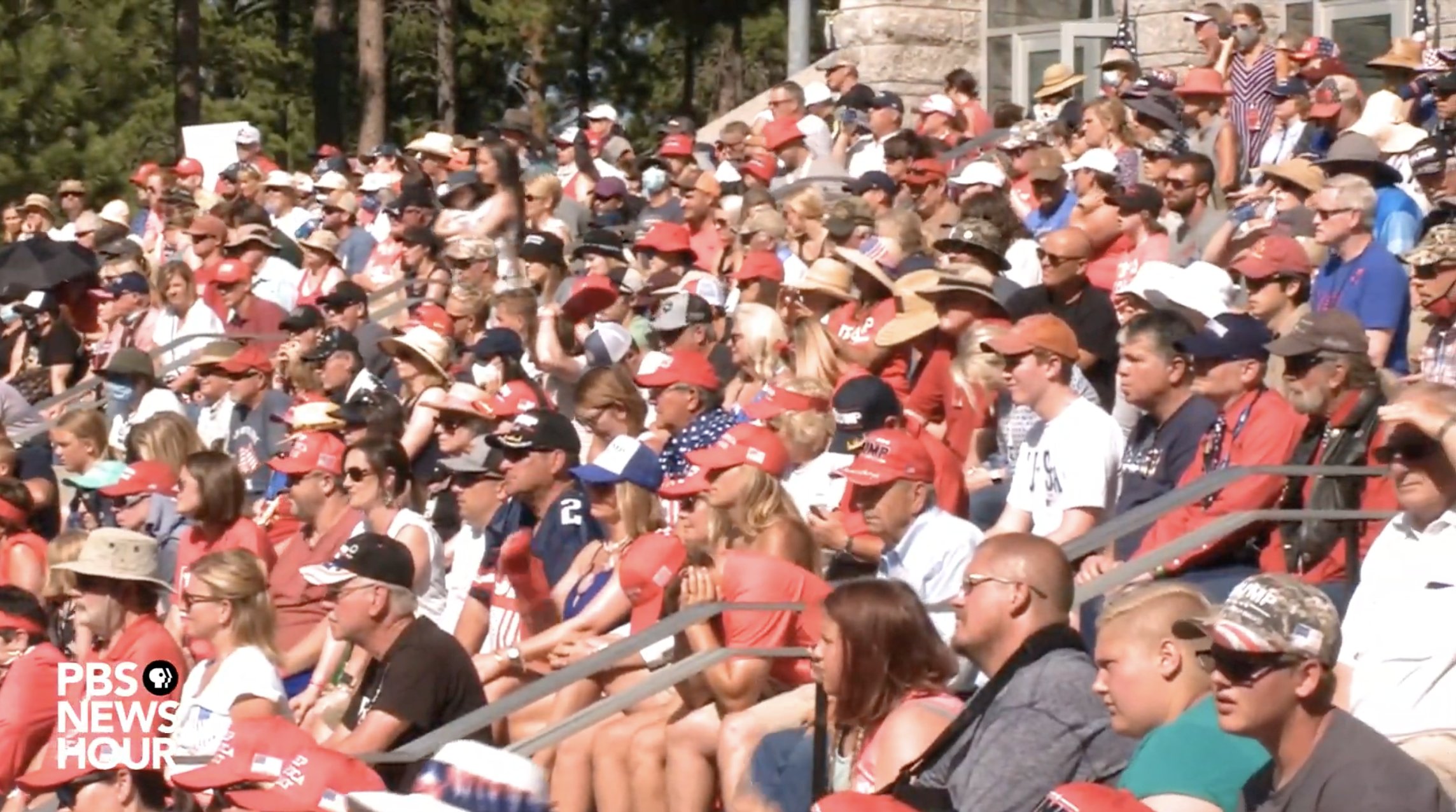