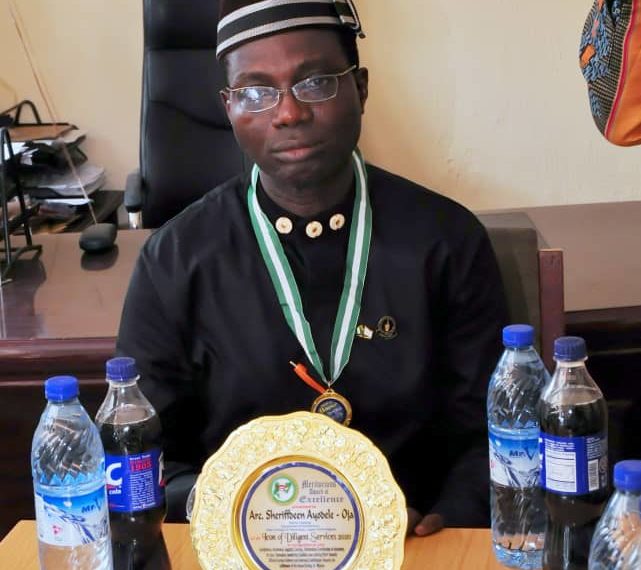 The National Association of Nigerian Students, NANS has presented a distinguished leadership golden-award of excellence to the Staff Advicer of JCIN Yabatech, Arc. Sherrifdeen Ayodele-Oja, for being an icon of diligent services and youths ambassador for 2020.

Arc. Sheriffdeen Olashina Ayodele-Oja, a Chief Lecturer from the Department of Architecture, Yaba College of Technology(YABATECH) is known for his rapid response to growth and development of Nigerian youth.

The life of Arc. Olashina is akin to the proverbial grass to grace story – he has essentially risen from a humble background under quite limited circumstance to become who he is today and as asserted by Henry van dyke’s stipulation “some people succeed because they are determined to,” in other words the rear combination of the twin attributes of confidence and determination made him to attain the position he is today.

When the roll is called for the most outstanding and exceptional man, one person whose name will feature prominently is Arc. Sheriffdeen not because he is a man but he is a rear and exceptional specie that has outstandingly show that he is an ivory tower born with man power capacity to teach and educate thus Humanity.

If intellectual distinction, personal industry, integrity and Honesty are the marks of professional excellence then Arc. Sheriff-deen Ayodele-Oja is truly a great man, he is a man with the powers of making lasting impression on the people he leads, he handles matters that the course of event continually affected by what he did, a man whose contribution to the education system in Nigeria is phenomenon, an erudite administrator and sagacious Architect. 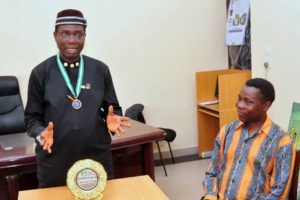 As a disciplined lecturer in YABATECH, with an analytical mind, very humble, simple, hardworking and progressive mindset, he was on Thursday, 12th March, awarded by youths under the umbrella of NANS.

The NANS is a group of best minds in Nigeria, the largest, most populous and most prestigious students advocates in the sub Saharan Africa, east of the equator, west of the mahaha, south of the Sahara and the north of the Limpopo and was also confirmed Youth Ambassador of over 40.1million armless battalion of National Association of Nigerian Students (NANS).

To appreciate his wonderful work in service to humanity, NANS stands the only authority Voluntary Students/Youths Organization to confirmed the high stand of award honour to him as an ICON OF DILIGENT SERVICE for the year 2020 and pronounce him as a Grand Commander of Nigerian Students (GCNS).

According to NANS, Arc. Sheriff-Deen Olashina Ayodele-Oja is a man who is highly religiously inclined, a total album of decency and a spotless mirror in the Architecture sector (Ministry of Education, Yaba College of Technology, Yaba-Lagos State) in Nigeria. he is a walking encyclopedia of intellectual society and a leading authority in Building younger generation.

A man with deep intellectual vision, a philanthropist, a giver, very passionate, God fearing, an apostle of efficiency in professionalism, whose strength lies in his highly professional work, ethics, value, discipline, dedication, mindset and ability to strategize.

“As a navigator of development, the recognition of your outstanding imprint on the sand of time will remain forever, we see you as a globally thought Architect who thinks globally, and act locally you are an inspiring and committed mentor of our time, as well career builder.”

“You are a leader, a father with an incomparable inspiration and a highly cerebral dogged fighter, in the epithets of life, there was never an achievement without an achiever and there can never be a testimony without testimonials. So achievement in whatever shade is effusive and admirable. You are a man that looks radiant and pregnant with hopeful expectation, you are not only a success in public live; your private life is also a resounding success, a good family man a companion of family values a devoted father with lovely children, a prolific and distinguished man of honour, an achiever of distinction, a man of probity and sincere believer in accountability.”

“On behalf of the over 40.1million of Nigerian Students in home and Diaspora, NANS hereby pronounce the prime of our generation for this Award as you deserve a descent mention and attendant space in the Outstanding Leadership Golden Award of Honour As an ICON OF DILIGENT SERVICES 2020 and welcome you to our wall of Fame.”

In attendance was the 2020 President of JCIN Yabatech, Jackson Adewale AYIKA, Representatives from NANS, Staff of the college and many other dignitaries. 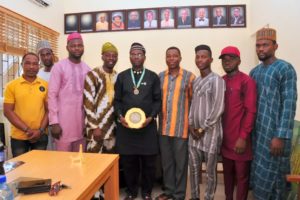 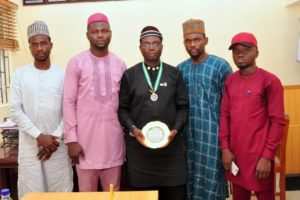 Cloudflare During for Coronavirus Emergency, encourages Employees to work from home, makes changes on "Cloudflare for Teams".

Cloudflare During for Coronavirus Emergency, encourages Employees to work from home, makes changes on "Cloudflare for Teams".