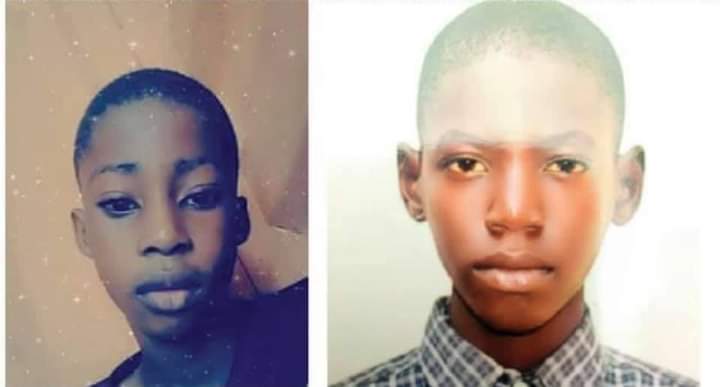 The Nigerian Police Force in Alapere, Ketu Division of Lagos State have been accused of playing tricks with viral missing teenagers as more details emerges on where they allegedly went to.

Recall GBETU earlier reported that three neighbors simply identified as Fatai, Adam and Kehinde, were arrested in connection with the disappearance of the two victims, Fawaz Surajudeen and Kudus Oseni – both 14, classmates and in Senior Secondary School 1.

But “The problem now is, the police have refused to investigate the matter, and they know the place where the boys are probably kept. The police are playing all sorts of tricks to cover up the issue.” Says Solomon, a mandate reporter for Sahara Reporters.

“They were five in number while two were reported missing; they hid this for over one week until one of them confessed what happened. This 18-year-old guy, Fati, arranged this with some people.”

Surajudeen alongside four of his friends had gone to have fun on New Year’s Eve but never returned home to his parents. Of the five boys, only three came back home. The aforementioned and Kudus never made it back.

According to Solomon, the IPO (Investigating Police Officer) in charge of the case was been biased and taking sides with the alleged perpetrator.

“As I speak, the case has become a money-making venture for the female police officer called Kemi at Alapere police station. She has been giving unusual excuses to the parents of the missing child; she even threatened to lock them up in the cell,” he said.

Regarding the recent development, Solomon said the DCO explained that she contacted the Baale (traditional ruler) of the area and was told that the children were reportedly swimming at Ojubo Yemoja, which is considered taboo for anyone in the area.

“Yemoja” is a female goddess or deity in Yoruba land, the boys allegedly went swimming ‘in her space.’

He said he had however gathered that Fatai’s mother has a boyfriend (a prime suspect) who has been calling Fatai repeatedly since the incident.

“When I approached Fatai’s mother and asked her where the boyfriend was at Agboyi Ketu, she sent Fatai to take the children. She was afraid and she began to cry. She invited her sister and when that one saw how the pressure was, she stylishly ran away from the station. We traced her, pressurised her to bring the phone belonging to Fatai’s mother because it was very necessary to know who was calling.

“The sister said she hid the phone inside her 5-year-old boy’s school bag, we all went to the school to retrieve the bag but to our amazement, we saw Fawasi’s phone in the bag which Fatai was able to unlock with no effort.”

He expressed his belief that the children were not dead yet and that they were rather kept somewhere, adding that appropriate and prompt intervention by the police will hasten their rescue.

A father of one of the children said his son, Raji Kehinde, had narrated the incident to him.

“Kehinde said they all left home and on getting to Agboyi Ketu, they saw a river and Fatai told them to board a canoe but Fawasi and Qudus said they couldn’t board the canoe. They stood aside so Fatai helped them cross to the other side of the river.

“Fatai took a while before he came back so they had to wait for him, and on getting back, Fatai was with the clothes of the children, and they asked him where he got the clothes, he said it belonged to the boys that they said they wanted to bathe but drowned in the river.”

Father of Adam Eunice, another child, said his child told him the five children had gone to the river at Ketu but only three came back after the two drowned. Eunice had also told the father that Fatai said no one must share the story of what happened else they die.

“Adam, Fatai, Kehinde, Qudus and Fawasi went to the river on the 31st and we didn’t even know Adam went, he never told us. When police arrested these children on Friday, Adam told the police that Fatai took them to the river. Qudus and Fawasi refused to get on the canoe but Fatai, Kehinde and Adam got on the canoe to meet someone who told Fatai that he didn’t have enough money, so gave Fatai N200, then the friend of the person also gave N200.

“They left the place and discovered that Fawasi and Qudus were already looking for them. They were told that there was a man there teaching people how to swim but Adam said he was not interested so he was asked to wait. Fawasi, Qudus and Fatai jumped into the river while Adam was just there taking a bath by the riverbank. Suddenly, he heard a scream and the next thing Fatai said was Qudus and Fawasi had drowned. Fatai bought a polythene bag and kept the children’s clothes inside. They all asked Fatai what they will tell the parents but he warned them not to say a word else they would all die.”

GBETU had earlier reported how clothes of the missing teenagers were found in an abandoned building within the neighborhood by Police.

There are multiple narrations about the story but the ‘river’ have remained constant.

How General Olusegun Obasanjo got bullet on his buttocks