Alaafin Of Oyo has reportedly sends his youngest wife, Olori Badirat Ajoke, packing over adultery allegation with Olasunkanmi Wasiu Ishola, simply known as Kwam1, as revealed by the gods.

According to news, Olori Badirat Ajoke was sent packing yesterday by Oba Lamidi Olayiwola Adeyemi III, the Alaafin of Oyo, after allegations were made by a popular blogger, Esther Aboderin aka Esabod that a wife of the Alaafin of Oyo was having an adulterous affair with a popular fuji artiste, King Wasiu Ayinde Marshal (KWAM1).

The 9th wife Olori Ajoke who is currently observing her mandatory one year National Youth Service is a 2018 graduate of the prestigious University of Ibadan, Ibadan, Oyo State. 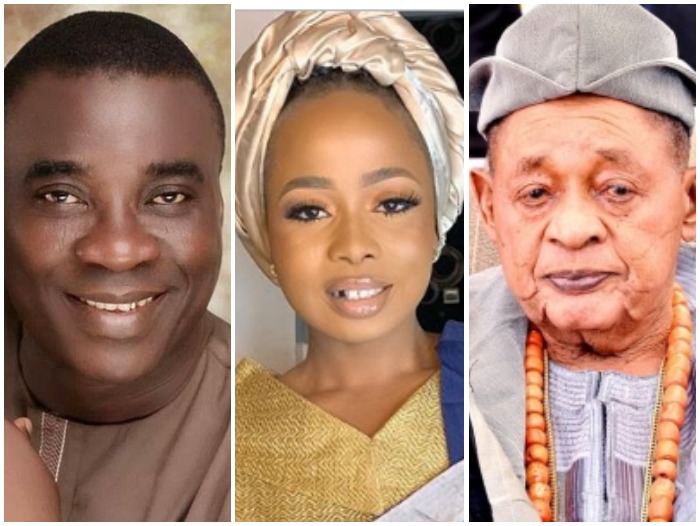 Who is Esabod?
The name Esabod is a household name . Esther Tokunbo Aboderin, born in Ibadan in the year 1961 March 26th. Her mother was late madam Foyeke. She was born into the famous Aboderin family of the ancient city of Ibadan. She started secondary school in the year 1974 and graduated in 1979.She was admitted into university of Ibadan to study Medicine,l.she did not finish the study and left the school to work at the default toll gate in Ibadan.

Madam Esabod got married to her first husband legally in the year 1982 at Ibadan. She gave birth to her first child Tina Atinuke in 1983 at Olusanya hospital Ring road Ibadan. She also had another Son for her husband before she relocated to United Kingdom to start another life.

On getting to United Kingdom she got engaged to Niyi Oyewole and had two children for him, namely Hannah and Wale.Her marriage to Niyi Oyewole otherwise known as Gadaffi turns out to be a very wrong decision. Niyi was her driver while she was doing business in Nigeria. Niyi Oyewole turns himself to terror to her and to her children.The domestic violence was so much that the Govenment in Ireland had to separate them and gave her husband a barring order. Niyi Oyewole aka Gadaffi did not get over the separation and up till today ,he is looking for ways to get back at Esabod.

Esabod did a lot of businesses both in United Kingdom and Ireland She came back to Nigeria in early 90s and bought 3 shops in Gbagi market in Ibadan.Due to mystical powers she lost everything. She had to be doing kabukabu with her car to make ends meet. . After she lost all her investment in Gbagi market.She became stranded in Nigeria.She eventually got help and travelled back to United Kingdom.

Esabod did all odd jobs that Nigerians were doing in United kingdom without achieving anything.She later moved to Dublin with her family.In the year 2010 she started bloging with the name Esabod.She is one of the pioneers of talk show on social media mainly the facebook. Her talk show was mainly to speak against house wives who commit adultery. Within a short while the name Esabod became a household name.The fair of Esabod becomes the beginning of wisdom for housewives that commit adultery.

Madam Esther introduce comic into her talk show by talking on sexual activities.This is what many want to talk about but because of societal norms they are afraid to do so.When Esabod started treating such topics, she gained millions of viewers and followers.

She started the used of herbs and roots to treat diseases and sickness in 2016 .She named the company Esabod herbs and roots. .She started with the famous Adodun (cream that makes sex enjoyable),others like 13days etc were added to her products.

As Esabod fame increase on her talk show many people started to identify with her .This led to the creation of Ewe group also known as Ewenation .Members are called Omo Ewe.The group had membership all over the world and everyone is always happy to identify with Esabod and Ewenation.

Esabod definitely has many enemies because of the things she speak against. She always say the truth no matter who is involved.Many housewives who are not faithful to their husbands do not like her or her brand. Some housewives who have been caught committing adultery ganged up and form another rival group to attack Madam Esabod and her brand.

The name Esabod means different things to different people depending on the angle you want to look at her. Esabod the spiritualist,she is a voodoo doctor that treat so many sickness and diseases.She did Spiritual works for people that have immigration problems or court cases.Many people have been calling her to testify to the efficiency of her herbs.To such people she is a small God. Such people see her as a vodoo doctor or spiritualist.

According to some people she is a no nonsense blogger .She has the Esabod global news and so many other blogs to her credit.Her blog is very popular .Thousands read her blog daily. It is well known allover the world.She has trained a lot of people the act of blogging. She made many people know that we can make money by been a blogger.

Tokunbo Aboderin is a motivational speaker .To some people she brought hope to their life when all hope were lost.This she does by using her life story to inspire many ladies passing through problems. She always implore women to stay focussed and never to commit adultry. According to her every body must work.No woman should rely solely on her husband.

To some she is a fighter . Esabod will always stand by whatever she belief’.She never encourage gossiping and will never back bite.She does not encourage gossips among her members.

Esabod to some is the vulgar woman.Being an Ibadan lady no word is too big to come out from her mouth. Some words that we all love to hear but are afraid to say,comes out freely from Esabod’s mouth .According to her Pennis and Vaginal had no special name ,you call it as it is named.

She is lovely mother to her children .She recently bought a jeep for her daughter EweTina.She does not hesitate to spend money when her children are involved.

Some people see her as the proud rich woman.She is always ready to flaunt her wealth.She is a very hard working and rich woman.

Esabod the socialist .She enjoys party and always like to throw party for her birthday. Her 56th birthday was done in London last year, it was talk of the town throughout 2017. The 57th she had this year in Dublin was the best and will remain talk of the town for a very long time.She brought in a popular musician Saheed Osupa from Nigeria with all his band boys. The M C Seyi law was imported from Nigeria. Seyi law is one of the most popular M C in Nigeria.

Esther Aboderin is a philanthropist.She gives money to the needy.Most of the members of her group have gain one thing or the other from her. Tokunbo the fighter, She fight tooth and nail for anything she beliefs in Esabod mother of all.

She is a mother that cannot count the number of children she has. Many are happy to affiliate with her and to call her mum. Which ever way you put it Esabod is all in all.

Meanwhile, on a morning gram on Thursday, Kwam1 took to Instagram commenting on the situation with a performance song saying their anger has no meaning using Yoruba language.

KWAM1, who was recently given a title by the Alaafin of Oyo, Oba Lamidi Adeyemi, as the Mayegun, said that many haters have been rooting for his downfall and working towards tarnishing his image since he became the Mayegun.

Kwam1 further charged his fans not to react or contend with the false claims, as such won’t influence his status or his music profession that had spread over decades.