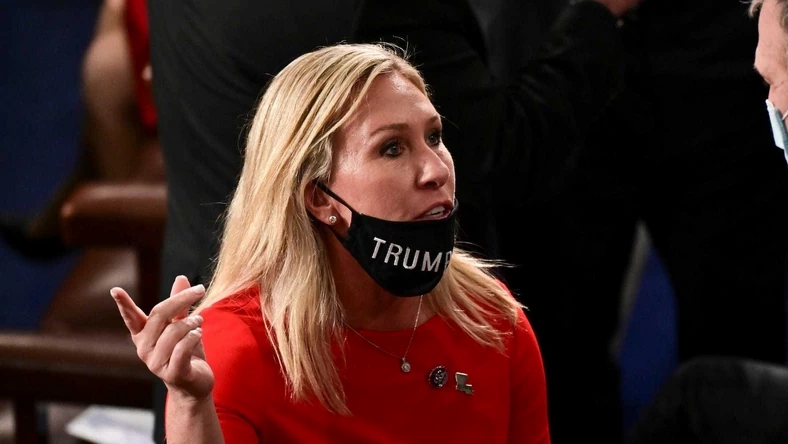 Marjorie Taylor Greene was among at least a dozen Republican congressional candidates who expressed some degree of support for QAnon.

An ardent Donald Trump supporter, she is know for factual theories
Greene and has made some rigging claims in the 2020 election.

Like Trump, Greene also had her Twitter account temporarily suspended for “multiple violations”. She was hit with the 12-hour suspension after tweeting alleged election fraud claims in Georgia, her home state.

Taking to her restored Twitter page on Thursday, Greene said, “I just filed Articles of Impeachment on President Joe Biden, we’ll see how it goes.

“I’ll be introducing Articles of Impeachment against President-elect @JoeBiden due to his abuses of power as Vice President. Americans can’t have a President who has threatened foreign governments to remove government officials.”

“President Joe Biden is unfit to hold the office of the Presidency. His pattern of abuse of power as President Obama’s Vice President is lengthy and disturbing.”

Greene then went on to claim that Biden had committed to quid pro quo with Ukrainian officials while he was Vice President in order to help his son “siphon cash from America’s greatest enemies Russian and China.”

Biden was sworn into office on Wednesday to become the 46th president of the United States.

Greene said Biden should be impeached for “enabling bribery and other high crimes and misdemeanors, by allowing his son to influence the domestic policy of a foreign nation and accept various benefits – including financial compensation – from foreign nationals in exchange for certain favors.”

Biden’s ties to Russia and, in particular, the energy company Burisma became one of the Trump campaign’s major talking points during the debates, especially after the New York Post published a story alleging his son Hunter Biden had made deals with the Russian government over access to his father when he was vice president.

Along with filing the articles of impeachment, Greene has asked supporters to text and sign a petition and donate funds to her impeachment filing, though language on the donations page specifies that the donations are being made to “Greene for Congress” and “will be used in connection with federal elections.”

Both houses of Congress are currently controlled by Democrats, making it unlikely that Greene’s impeachment push will move forward.

Greene is one of two members of Congress – along with Colorado Rep. Laura Boebert – who has expressed support for QAnon, a baseless conspiracy theory that alleges President Donald Trump is secretly fighting a “deep state” cabal of pedophiles. Greene’s support of QAnon, according to Media Matters , dates back to 2018 – though, in recent months, she claims to have distanced herself from the group.

I will smash Anthony Joshua in Three rounds - Tyson Fury